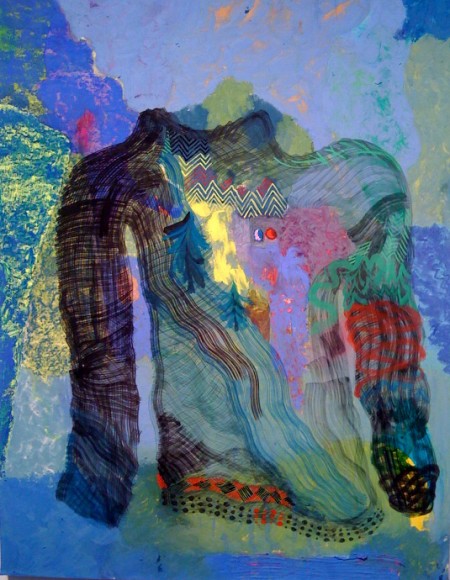 Consider for a moment the holiday sweater, that painfully trite accent of the lowbrow winter wardrobe. If it wasn’t an obvious faux-pas to begin with, it has now become a striking cliché, developing its own cult of ironic re-appropriation and parody among the fashionable and the aloof. Rather than relish in this idle mockery, Tyson Reeder, an artist with a penchant for unusual creative situations, has decided to use the holiday-sweater phenomenon as the basis for a collaborative work of art.

Though the holidays have drawn to a close, for the next month Reeder will be offering willing participants the chance to gradually contribute to the relatively amorphous design of an imaginary sweater taking shape, in paint, on a single canvas. Beginning last week, Reeder converted SubCity Projects—an artist-run, micro-exhibition-space—into a participatory public painting studio. He began the basic under-painting of the sweater-in-question himself, but anyone interested in making a subsequent contribution can stop by SubCity Projects—which is normally locked, though the makeshift studio, and painting in progress, remains visible—to schedule a thirty-minute painting session. It is unclear, as of yet, whether plans have been made to exhibit the finished product, but it already seems that it is not necessarily the most important part of the endeavor, which is sure to result in a sweater—albeit imaginary and only existing in representation—more elaborate than anything you will find at a thrift-store or shopping mall. (Nate Lee)