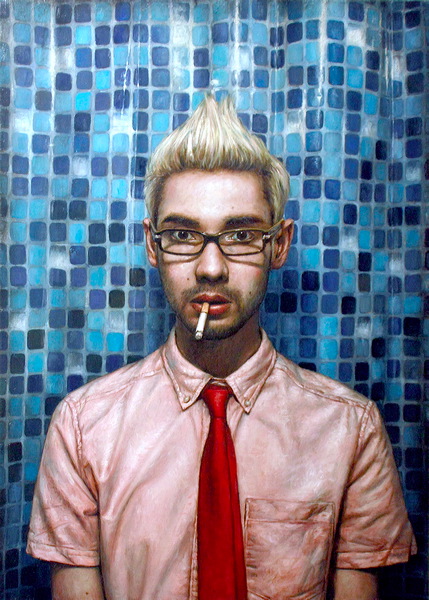 “Why have artists chosen to work in a medium that is retrograde at best, and at worst outdated?” This is the question answered by fifty-two MFA candidates or recent graduates, as selected by Sergio Gomez, the in-house curator of the Zhou B. Art Center. Invitations were mailed to over 400 MFA programs in the United States, and 255 artists responded to what might be the first national MFA exhibition devoted exclusively to painting (or, actually, “the embodiment of the idea of painting,” where any materials could be used, as long as paint was among them, and it could be hung on a wall).

This is quite an ambitious project, and unlike most national juried shows, there was no entrance fee. It was funded entirely by sponsors, mostly the industrious Zhou Brothers, who have been very generous to the art community they joined twenty-five years ago, when they moved to Chicago possessing not much more than MFAs from the National Academy of Art and Crafts in Beijing. But an MFA program in a twenty-first century American university is probably quite different. Here, the emphasis is more on art theory than art practice. So, each of the fifty-two paintings on display are accompanied by texts that run the gamut of postmodern art theory, and since both images and texts can be seen online at visualarttoday.com, one might then ask: is this an exhibit that really needs a brick-and-mortar gallery to be seen? Are there any subtle visual relationships that get lost in cyberspace? And, regretfully, I think the answer is no—especially when compared with the vibrant paintings that older, local artists have hung upon the many corridor walls that wind throughout five floors of the Zhou B. Art Center. Except, perhaps, for local MFA Ryan Shultz, whose art theory is as retrograde as his painting: “Painting demands time, pause, reflection—it slows down our techno-pace…and offers a space for contemplation.” More common in this exhibition is a catechism like this one, from Michael Hubbard: “The most effective painting today must involve a rearranging and re-contextualizing of the definitions, qualities and histories of painting.” Hopefully, the next Zhou B national show will focus a bit more on visuality, like the national self-portrait show they’ve been running for six years. What about a national show for landscapes? Or geo-form abstraction? Or—heaven forbid—the human figure? Can’t universities collaborate on their own national MFA shows like they already do with basketball tournaments? (Chris Miller)