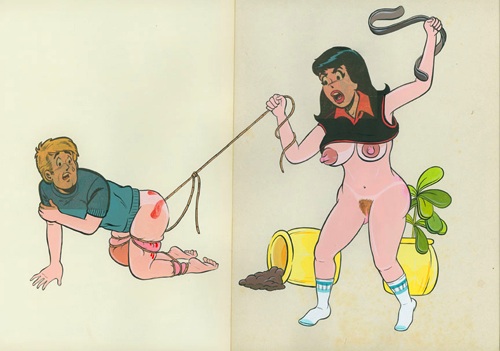 Of all the cock-centric collages on exhibit this past year in Chicago (and there have been surprisingly a lot), Mark Mulroney’s hyper-sexualized reworking of old Archie comics are perhaps the most successful. Mulroney’s collages excise potent facial expressions from the lovable characters and then use those captured looks as springboards to inspire a slew of naughty dramas. The various mise-en-scenes employed range from the surreally sexual (Archie in gym socks with a giant penis exploding through a dog house, while the dog rushes to clean up) to the grotesque (Betty in panties and a tight sweater that hugs her engorged breasts trying to beat off a rat who has eaten through her leg). The tie that binds all of these representations together is an adolescent pop sensibility that keeps everything cute, far from the shock one might anticipate from a collusion of pop and porn.

Mulroney’s injecting of old comics with healthy doses of non-vanilla sex acts is an engagingly charming, but surprisingly commonplace, strategy. What makes these collage-drawings so attractive is the way they are put together seamlessly and with seeming effortlessness. In many cases, the artist copies exactly the extracted image with such exactitude that one does a double take. One of the pieces sums up this wonder perfectly—a character inserting a finger into the wounded side of a nude Betty in the same way Doubting Thomas examined his risen leader. Confronted with these charming collages, one has the urge to poke and prod and touch, which makes sense as Mulroney drives us to rediscover teenage libidinal imaginations. (J. Thomas Pallas)