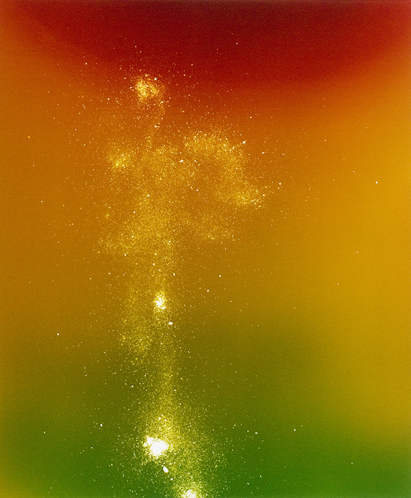 After his death, in 2006, the artist Robert Heinecken’s ashes were collected in salt shakers, the kind you see in a diner. This was not inconsistent with the artist’s irreverent sense of humor, and his widow, Joyce Neimanas, distributed the salt shakers to more than a hundred friends and relatives. The remaining undistributed salt shakers were placed in possession of the Heinecken Trust, in Chicago, directed by Luke Batten, the artist’s former studio assistant, who gives them away as he sees fit, in consultation with Neimanas, to artists who may not have known Heinecken personally but who find inspiration from his body of work. After receiving one such salt shaker as a memento, photographer Jason Lazarus asked Batten and Neimanas for their blessing to use Heinecken’s cremains in a new photo project, now called “Heinecken Studies.” Lazarus recently debuted the twenty-five prints on his website, and in email and Facebook announcements.

Where some people choose to have their cremains scattered over scenic cliffs, or buried with seedlings, or cast into outer space (such as Timothy Leary’s), Heinecken left no specific last wishes for his bodily remains. The contents of Lazarus’ shaker were brought into the darkroom, dusted over photographic paper and exposed as photograms. Lazarus made the twenty-five prints in succession, in a single sitting, in what he calls an “aesthetic daisy chain,” where each image is a response to the previous one. Unlike a black-and-white darkroom, where red safety lights guide the hand, a darkroom for color exposures must be pitch-black. Lazarus toyed with the color dials, leaving much to chance, and used special flashlights to “burn” the exposures with light—a wink to the cremation process itself. The results are luminous gradations of saturated color, from blood red to sky blue to somber black, with the chalky white bone fragments cast about in little piles. It’s not as grotesque as it sounds; in fact, as a photographic process, it’s quite fun and improvisational, characteristics of art-making that Heinecken himself would approve. 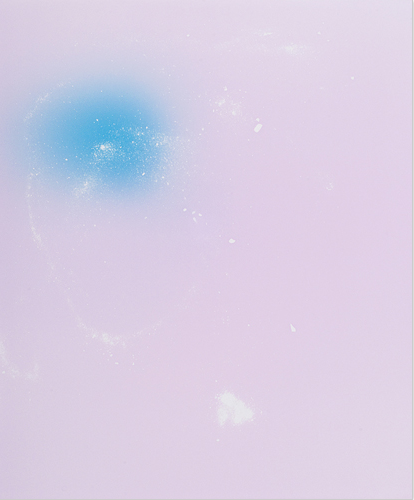 Photographer John Opera likened Lazarus’ prints to the German photographer Wolfgang Tillmans’ camera-less abstract photograms, circa 2000, where swooshes of gradient color similarly bleed across the paper. The photogram process is an old one, practiced by Man Ray and Moholy-Nagy and Heinecken alike, and it remains popular with contemporary artists. The process is very hands-on, welcomes experimentation and is totally anti-Photoshop. Photographers love it because it’s a technique-driven process. Batten and Lazarus have been toying with the idea of curating an exhibition of contemporary photograms in a Chicago gallery.

While Heinecken didn’t originate the photogram technique, he pushed it beyond its usual uses. “He butted up against the assumed limitations of photography,” says Lazarus. Heinecken was termed a ‘para-photographer’ and a ‘photographist’—but not a classical ‘photographer’; he made prints by exposing paper against the television screen, collaging negatives and using photography as an incidental tool, in non-traditional ways. Heinecken was very interested in the material of mass-culture—food, porn, magazines—which he organized into complicated, semi-abstract forms; by extension, Lazarus’ use of his ashes transforms matter, the stuff of everyday life, into something fantastic, proposing beauty where there’s only devastation. Lazarus’ “Study #4” could be an explosion in space; “Study #19,” spermatoza congealing in the womb; “Study #23,” a disease suspended in a Petri dish, on the edge of destruction. References to the body are apt, of course, considering the “terribly intimate material,” says Lazarus, but his colorful pairings awaken imaginative new associations. 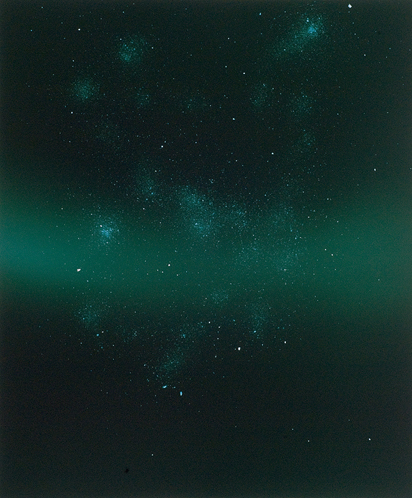 Heinecken founded the photography program at UCLA in the 1960s, and retired to Chicago in the mid-90s, teaching a few classes here and there at SAIC, where Neimanas taught full-time. In 1998 he had a major retrospective at the Museum of Contemporary Art, where Lazarus also had a solo show, just one month before Heinecken’s death, in 2006. As Lazarus will begin teaching a course at SAIC this coming term, he is similarly focused on the continuum of education, and paying it forward. He is in discussion with Heinecken’s widow to establish a fund from the sale proceeds of the “Heinecken Series,” which will provide a scholarship to a promising young photographer.

“I want to see, before I die, what I can make,” says Lazarus. Not for immortality’s sake, but because there is so much to experience, and to learn, and to contribute. As Lazarus’ art comes more and more into public light, with a current show at the Modern Wing (where he confronts a similar take on death and photography), and earning awards and distinctions, his images take on a galvanizing role, documenting shared affections, and presenting them back to us for traction, so we may be propelled by life’s friction.

The “Heinecken Series” can be viewed at jasonlazarus.com