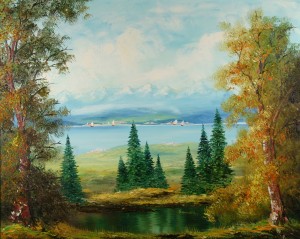 A work in the exhibition

Warning! The current exhibition at DePaul University Art Museum contains some laughably bad-ugly paintings. On wall labels alongside each work, director and curator Louise Lincoln explains exactly why each and every piece in this show of rejected art is as worthless as they might appear. Unlike the words written on the walls of the Modern Wing, where the best contemporary art is sometimes validated by the most unpredictable explanations, the labels here give reason for the museum to discard each work.

“La Trini” by Jose Puyet (1922-2004) “has not transcended its probably intended context of a bar or restaurant catering to men.” Another, titled “Awakening Dawn” by Gary Grotely (b. 1945), “appeals to a niche commercial market; it does not fall within collecting guidelines” of the museum. “Toledo (Moving Earth ),” by Gerald Hartley, is “reminiscent of the work of the Abstract Expressionists,” but “is hampered by its small scale and the overall quality of kitsch.”

Ms. Lincoln wants to ask questions as well as answer them, so visitors are given color-coded dots to apply to the wall alongside each painting, granting their own taste by sticking green, blue and yellow dots—demarcating a judgement of good, bad or ugly, respectively—mimicking the red ‘sold’ dots seen in so many commercial galleries. As of the exhibition’s first weekend, Grotley’s “Awakening Dawn” scored thirty-five “good,” eight “bad,” and five “ugly.” Despite the crowd appeal, only one judgment will count here, and it’s already been made. Preparations are underway for the opening of the DePaul Museum’s first permanent gallery, in 2011, with a primary focus on Midwestern artists of the mid-twentieth century.

Recently, some museums, such as the Los Angeles County Museum of Art, have come under fire for selling substantial assets in order to keep their doors open, leading the Association of Art Museum Directors to reassert on January 15 that “works cannot be deaccessioned to provide funds for operating or capital purposes.” DePaul’s deaccessions, however, will pad the museum’s acquisition endowment fund, and while the works are not expected to bring in tons of revenue at auction, trimming a collection’s fat in order to build its muscle is within the code of ethics as laid out by the AAMD. 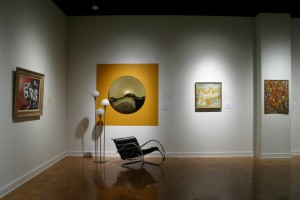 Deaccessioning art can be controversial. The Minneapolis Institute of Art sold a Bouguereau painting, in 2004, to buy an Albert Moore, who was a contemporary of Bouguereau. A few years later, the Albright Knox Museum in Buffalo sold some of their substantial pre-Modern collection to buy contemporary. These are the kind of decisions that define a museum, as well as the priorities of the art world. So, who wants to donate a beloved collection if the museum will soon sell it off to purchase other things? In the case of the DePaul exhibition, this question is clearly answered. “In 1972 the DePaul women’s board announced a project to build a university art collection, and they encouraged their friends to ‘part with their treasures.’” While many of these works are “of lasting significance,” others are “more suited to a Chicago living room than to a museum.” This is all clearly explained in the exhibition, to great educational effort.

The rationales of deaccessioning are not often given public face time, but under scrutiny of critics such as Tyler Green, who presses museum directors on the subject on his blog, Modern Art Notes, and in The Art Newspaper, museum transparency is increasingly becoming a self-directed task. Last April, Maxwell Anderson, director of the Indianapolis Museum of Art and a pioneer in museum transparency, put all 800 of his museum’s recent deaccessions online, offering explanations as well as pictures, estimated value and the provenance of each and every one.

While the Internet freely wrenches open such doors of secrecy, the DePaul show’s unique sticker-voting system provides a future template for public opinion. It is only symbolic, though, as the works will be sold regardless of the final vote. As more museums begin to blog and twitter, and reveal to the public more than just their mission statements, will public opinion soon inform policy? DePaul’s show signals the beginning of a new era in American art museums. In the nineteenth-century, museums were founded, stocked and run by wealthy, blue-blood aesthetes, like the remarkable Martin Ryerson here in Chicago. In the twentieth-century, management was handed over to academic art historians and corporate directors. In the twenty-first, the art-concerned public may finally have a role in what it gets to see—whether good, bad or ugly—represented in art museums.

“The Good, the Bad and the Ugly: Museum Collections and ‘Deaccessioning,’” shows at the DePaul University Art Museum, 2350 N. Kenmore, through March 19.