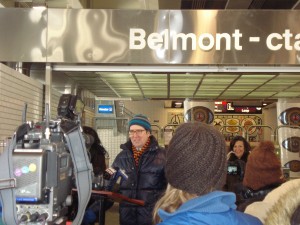 It’s about seven degrees outside, yet a handful of people are making no motion to go up the new escalators at the Belmont CTA station. Alderman Tom Tunney, along with State Rep. Sara Feigenholtz and artists David Csicsko and Erin Adams, welcome press and friends to the new face of the Red Line Belmont CTA station. The trains overhead and buses across the street cause Tunney to halt his speech several times, but the traffic is seen as a positive, as it acts to reinforce his hopes of revitalizing the economy around Belmont Avenue.

After straining to hear each speaker, the crowd is let into the station. There are congratulatory hugs and handshakes, as everyone takes in the station’s new look. The pillars supporting its platform are adorned with mosaic art. Kids and adults alike pose next to the pieces, which are a collaboration between Csicsko and Adams, for photos. The central piece, on the wall facing the entrance, is a train car filled with several faces. “It’s a train station,” says Csicsko, “why not celebrate trains?” A few girls run up to the eye of one of the faces in the train car. They pose for a picture and rub it for good luck. This eye is now an attraction.

“I wanted to embrace the vitality and the diversity of the community,” says Csicsko. And considering the eye now has its own Facebook page, it seems he’s succeeded. (Peter Cavanaugh)