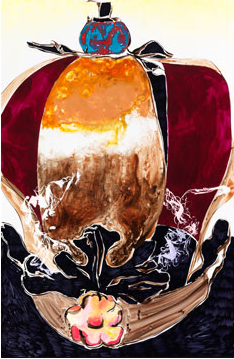 If one thought of Kim Piotrowski’s current show at 65Grand in musical terms, it would be an accomplished, refrained EP album from a talented artist who has had several hit albums. Simply titled “Crowns,” the show presents a selection of works that allegedly depict crowns sourced from Internet searches, though some are more literally apparent as such than others. The jeweled tiaras and golden coronets are so lush and layered that each piece adds a distinct timbre to the record. And the artist has allowed the works to be playful and experimental, adding new materials to her repertoire, like plenty of gold leaf and a synthetic paper that absorbs less of the paint. With the variety of instruments at her disposal, the pieces could be cacophonous messes, but they veer brilliantly toward cohesive inventiveness and sustained melodies. The strongest pieces are works like “She King” and “Sunken Glory,” but each of the tracks adds a new element and supports the whole experience. Like any good EP, the show whets your appetite for the upcoming releases. Luckily that’s not too far in the future with Piotrowski’s solo at the Hyde Park Art Center this Fall. (Jason Pallas)