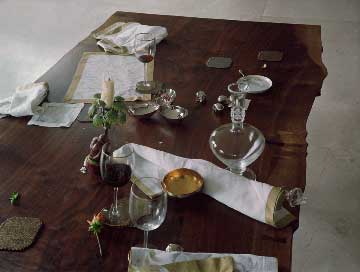 Always possessed of a sensibility directed towards decay, disorder and ultimately death, Laura Letinsky has at last reached the limit in her latest series of tabletop color still-life photographs, which take the leap into the abyss of memento mori. Shot at dusk, when French folk wisdom has it that dogs transform into feral wolves, Letinsky’s shadowed images serve up surfaces scattered with the detritus of life, as when we are treated to an array that includes a gruesome dead bird, cigarette butts, a fragment of an orange peel, a plastic candy wrapper, and some black globules of uncertain origin—all placed on an oblong piece of sadly wrinkled paper. Proof that Letinsky has come a long way down the highway to hell hangs in the gallery’s back room, where an earlier study of a kitchen table counter, replete with a dirty beaker, soiled butter knives, a folded sponge, and a wilting plant was shot in the morning and still carries the promise of a return to neatness and intelligibility. (Michael Weinstein)