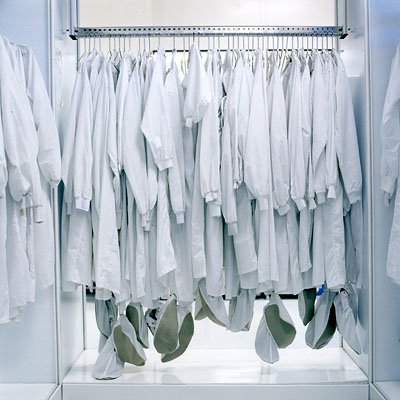 As part of his broader study of “industrialized space” in the era of globalization, photographer and installation artist Mark Curran honed in on the Hewlett-Packard Manufacturing and Research complex in Leixlip, Ireland that has since been closed down as the multinational technology giant went in search of cheaper labor. If we did not know the back story, we would look at Curran’s unframed, large-format photographic documentary portraits of the factory’s workers—tacked on the gallery’s walls—not as commentaries on the depredations of corporate capitalism, but as reflections on how individuals have become trapped in a technological environment, in which, in this case, they are wrapped in sterile white gowns, gloves and caps in order to protect the environment from them. Curran’s subjects, in frontal poses, jar through their juxtaposition of all-too-human faces and the inhuman workplace that other human beings have created. Curran’s anti-capitalist critique and the critique of technology that his images betray operate somewhat at cross-purposes, yet both have their truth. (Michael Weinstein)

Through March 19 at the DePaul University Museum, 2350 N. Kenmore