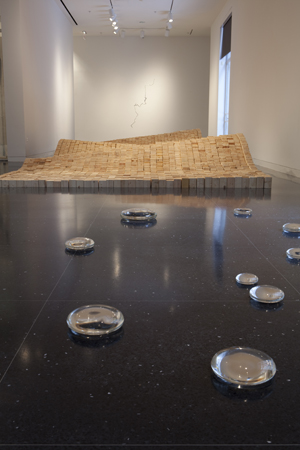 A collection of Maya Lin’s recent work, eleven pieces strong, sits in The Arts Club of Chicago. Lin is best known for designing the Vietnam Veterans Memorial, the obsidian black scar that slices through the National Mall (and mind). That iconic form began with potatoes on a plate—so the story goes. She shaped them like garlic-mashed plasticine and the idea for a thin slab of sculpture glopped into place on the plate in front of her. This genesis story speaks greatly to her career that has since developed, as a sculptor of slick organic shapes.

Strewn across the floor of The Arts Club are perfectly watery blown-glass drops that hint at the feeling of standing on the tip of a blade of dew-covered grass at dawn. Sinuous pins pushed into the wall and a flow of recycled silver suggest a river view from the stars. And a simple, meticulously arranged collection of two-by-fours standing on end melt into lumber waves of spruce, pine, and fir.

Like Andy Goldsworthy, Lin looks at mathematic descriptions of mountain passes and river bends as source texts. She models the liquid quality of water through the use of wood, rhyming spruce grain with waves, which is further informed by Lin’s study of geology, imaging techniques like sonar, and the fluid dynamics of fractal modulations.

The centerpiece is “Blue Lake Pass,” made using sandwiched slices of Duraflake particleboard. Lin splits a mountain range into twenty blocks, carving the bases into the cubic envelope of a skyscraping, overbuilt urban boulevard. Except, instead of crowned towers, the skyline is Rocky Mountain tops. Squeezing between the blocks, viewers weave in and out of mountain chunks that rise as high as your nose and in the traces of machined particleboard grain, there’s a faint echo of something larger than the sublime—a casual suggestion that maybe this is what it feels like when 14,000 feet is only shoulder height. (Ian Epstein)

Through April 23 at The Arts Club of Chicago, 201 E. Ontario