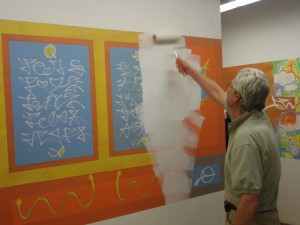 The Flat Iron Arts Building opens at six on “First Fridays,” and by seven a small line has formed at the gallery’s entrance. It’s a donation affair, and considering you’re bound to spend twenty dollars on cheap beer or a cab at some point later in the night, giving the girl at the door five dollars doesn’t sound like a waste. She hands out maps and points people up to the stairs.

The early gallery crowd is comprised mostly of adults over 30. They’ve got their standard-issue clear-plastic wine cups and smart glances. The wood floor creaks as a woman goes in to hug an artist. She points at a mural behind him. It is an abstract piece full of greens, yellows and oranges. It is also the main focus for the night.

Artists were invited into the building to take part in the Flat Iron Artists’ Association’s “Now you see it, now you don’t.” Comprised of many in-house and local Chicago artists, the project is a mural that stretches along the halls of the second and third floors of the building. Each artist is allotted about eight feet and a limited palette of house paint. It makes the walk through the galleries more than just bumping into that one guy you might’ve met at that one bar or awkwardly catching the eye of that one girl that saw you stuffing your face with a burrito the other night.

On one side of the hallway is the mural, while the facing wall holds examples of the corresponding artist’s work.

“We have all these walls,” says FIAA founding-member Charles Rees. “Why not paint it all through in murals?” And if by nine o’clock you’ve lost your map, you suddenly realize how helpful the murals are. Once you pass that painting of the shark, you remember you’ll be coming up on the excited and nervous artist, Lindsey Meyers. Standing in front of her piece—a blue wash decorated with text—she eyes Rees laying out a tarp and a bucket of white paint.

That’s the punch line of the night. As the crowd becomes younger, Rees makes good on his promise of the second part of tonight’s theme: “Now you don’t.” Earlier in the night, he was overheard saying that by ten o’clock they’d roll in the pizza, beer and a bunch of white paint. Meyers shrugs at Rees and laughs, “Oh, but I worked so hard on it!”

On the way out, some boys wheel a dolly stacked with pizza through the hall, and you can hear Rees rolling the white paint over his own mural—the first fatality of the night. All smiles, he asks, “Is anything permanent?” (Peter Cavanaugh)