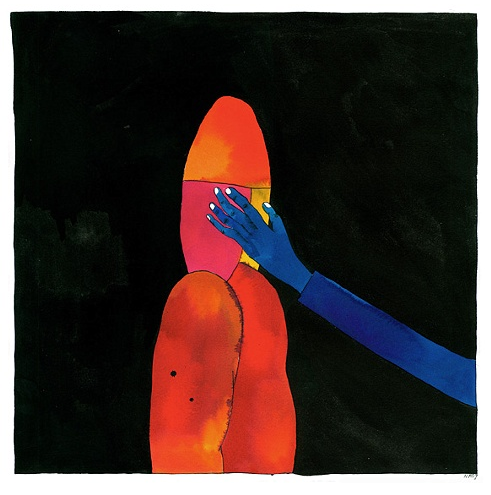 If you own records from the Sub Pop, Bella Union, Asthmatic Kitty or Brushfire labels, you may be familiar with Nathaniel Russell’s art, whose imagery graces the covers of records by bands such as Vetiver, Neil Halstead and Cryptacize. He also works as a graphic designer, and has redesigned more than 200 reissues of previously released records to date. Alongside these commissions, Russell maintains an active art practice, and a selection of new pen and ink drawings, screenprints and sculptural assemblages are on view at Hyde Park’s Home Gallery.

The vivid, saturated inks, and the 1960s and seventies-era stylized lines immediately stand out in Russell’s images, illustrating lonely blue cowgirls, winsome and innocent gap-toothed smiling mouths, and the (tongue-in-cheek) infinite wonders of the cosmos. The style is reminiscent of the Beatles’ 1968 animated film “The Yellow Submarine,” illustrated by Heinz Edelmann, whose 2009 New York Times obituary described the animations as “mod-psychedelic” and a “stylized, soothingly fluid, neo-Art Nouveau”; these are also apt ways to describe Russell’s whimsical style. 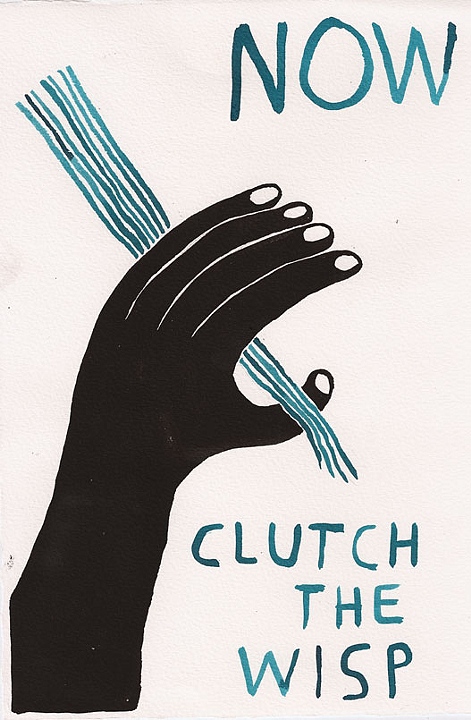 “Humor plays a huge part in appreciating the world,” says Russell. Cartoons and comics pop up in the periphery of his drawings, and he hails comic artist R. Crumb as a “big influence.” The work is often simple and direct, as if encountered in a sketchbook, and Russell often posts ideas and works-in-progress from his sketchbooks on his blog, Crooked Arm. He has a habit of keeping lists, including failed memoir titles and anthropomorphic foods.

Russell recently returned to Indiana and his Midwestern roots from Oakland, California. An earnest, wry, bearded fellow with a background in printmaking, he has spent his time on the West Coast creating posters and graphics for the Mollusk Surf Shop in San Francisco. The art on view at Home Gallery isn’t culled from Russell’s professional work in the music scene, but the sensibility is the same, notably in text and image compositions. He thinks of his drawings as “promotional posters for the present moment.”

Russell’s art is well appointed in the brightly colored, sunlit, modern rooms of Home Gallery. In a cozy and concrete way, Russell’s art has a lot to do with reading and with text. He builds bookshelves with wooden book replicas, adding humorous titles for the “fake memoirs,” and he doodles on antique found photographs. With titles like “miniature poems,” the works elicits a welcome smile. (Julia V. Hendrickson)