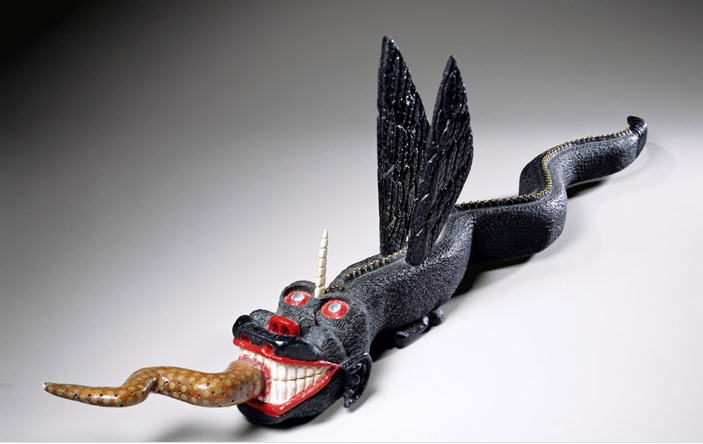 Despite a plethora of rhinestones and gold paint, “The Treasure of Ulysses Davis” really is a trove, with more than a hundred woodcarvings by Ulysses Davis (1914-1990), the self-employed barber of Savannah, Georgia, who whittled away his free time reflecting on storefront church theology and whatever other culture and American history he had picked up from grade school, magazine advertisements, talkative customers, and even a few books on African art. He was a hard-working man, and probably his biggest job was raising nine children with his wife in the house behind the barber shop. The best part is the bestiary of monsters, lovingly and obsessively crafted, the frisky kinds that inhabit the margins of medieval manuscripts and seem to bedevil the lives of anyone who tries to walk the straight and narrow path in a world constantly under attack by the Devil. These little beasties are never absent, but still, the salvation of the world can proceed through faith and hard work, and so the largest carving in this exhibit is a gentle but determined Christ upon his cross, bleeding for mankind. Davis proves himself quite adept, not only at intricate carving and designing, as in all the interlocking figures of his ujamaa “Tree of Life,” but also in conceiving unique imagery, as with the three golden spheres representing “Moses going to the mountain top.” In every piece Davis carved, there’s a sense of tense, tightly held self-possession, and the power of the earth. As with most self-taught artists, the beauty of human figures is outside either his interest or ability. Sometimes that can be a bit disappointing, as in his otherwise wonderful conception of Adam and Eve. The smart-ass serpent is so much more compelling than the two naked people who would seem more appropriately entwined beneath a lava lamp. (Chris Miller)