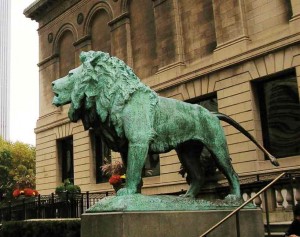 There’s that one movie about love that just opened. It’s still too cold for a romantic walk along the lake. There’s always the failsafe of cooking for that special someone. Or there’s that new happening that’s been popping up in various cities: scavenger hunts.

Inside the Art Institute on this Valentine’s Day, about ten teams of two go over their scavenger-hunt clues atop the grand staircase. Ella, one of the hunt’s guides, briefs the participants. She laughs after the word “competition,” and judging from the teams’ expressions, this is one of those “it’s the journey not the destination” events.

At 11am, the teams go in their separate directions as part of the “Naked at the Art Museum Scavenger Hunt.” No one runs and, in fact, Team Wicked Art makes a quick stop at the coat check before heading off to the African collection.

The clues are less than direct, asking teams to find such pieces as a maternity statue with the “biggest dogs.” And considering most of the teams are couples celebrating Valentine’s Day, it’s a great exercise in communication.

“It’s very much a dialogue,” says Nicole Baich, the other guide for the day. “One line of a question might fit with this piece, but the entire question might go with this other piece. So, you have to be patient.”

On their way to the miniatures collection in the lower level, Erika, from Team Nude in the City, gets distracted with a display of children’s books from her past. Kareem, her teammate, jokes about the need to hurry but isn’t too serious as he remembers the timeout he took earlier to scan a map of India.

“Miniatures are cute, but they’re not my thing,” a member from another team says walking up the marble stairs. And that’s the kind of response Ella and Nicole seem to want with these scavenger hunts. If nothing else, it’s exposure to an often overlooked attraction.

“When’s the last time you were here?” Nicole asks one of the two teams named Team Blue. They laugh and struggle, before finally admitting it hadn’t been since an old high-school field trip.

“It gets people in the museum,” Nicole says. “And we try to expose them to a lot of art that they may not normally see.”

Teams begin to congregate on the first floor a little before one in the afternoon. They turn their answer sheets in and the couples gingerly jab at each other for mistakes that they might’ve made along the way.

In the midst of securing plans for the rest of Valentine’s Day and poking fun at each other for miscounting the hands on the Tantric Deities Hevajra and Nairatmya, there is a general buzz of excitement for the museum. Lots of “I didn’t know they had the —-” or “Did you know —- even existed?” (Peter Cavanaugh)