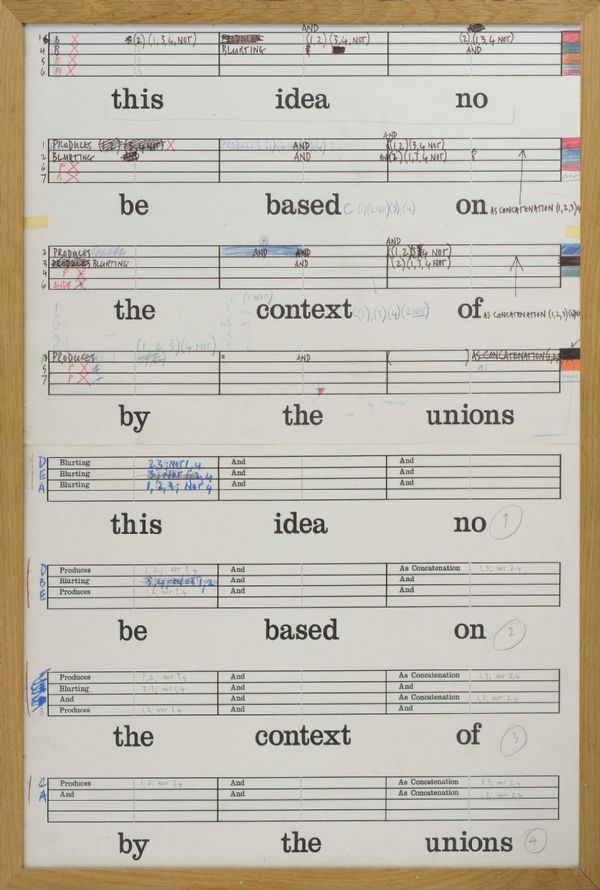 Rhona Hoffman Gallery is presenting the collaborative group Art & Language, with works ranging from 1965 to 2007. Michael Baldwin and Terry Atkinson founded Art & Language in the late sixties in England, and during the following decade the group grew to include other members (and a New York branch). The group is currently comprised of Michael Baldwin and Mel Ramsden.

Sometimes, we forget that Art & Language is a group of theoretical visual artists, not (plainly) writers or theoreticians. Unlike many of the calcified conceptual art experiments from the sixties, the works on view here are immediately fulfilling and effective visual art. The visual, of course, is still given a textual component. Be sure to consider the take-away writing component of the show provided by the gallery. The texts read as both preparatory sketch and conversational presentation. Through this writing the twenty works in the show—while arranged loosely by date—are given an even, contemporary, presentation.

This show is really about history: how do we approach the present in regards to our past, or, how does the present fulfill the past? In an interview between Mel Ramsden and David Batchelor in the early nineties, Ramsden reports, “a literal representation would be or would entail a misrepresentation.” We saw this thesis, for decades, actualized in the ever-changing practice (and members) of the group as Art & Language worked through the unexhausted assumptions of Modernist theory and practice.

Keep an eye out for the word “Surf” (as an abbreviation for both “surface” and, reportedly, “nothing”) in various pieces; for some, you’ll need to be quite close to the surface to find it legible, while in others (“Drawing for Index 18”) you’ll have to allow yourself a decent amount of distance. Distance—be it ten feet in the gallery, or forty-five years of history—makes this current show of Art & Language all the more fruitful. (Andrew Blackley)