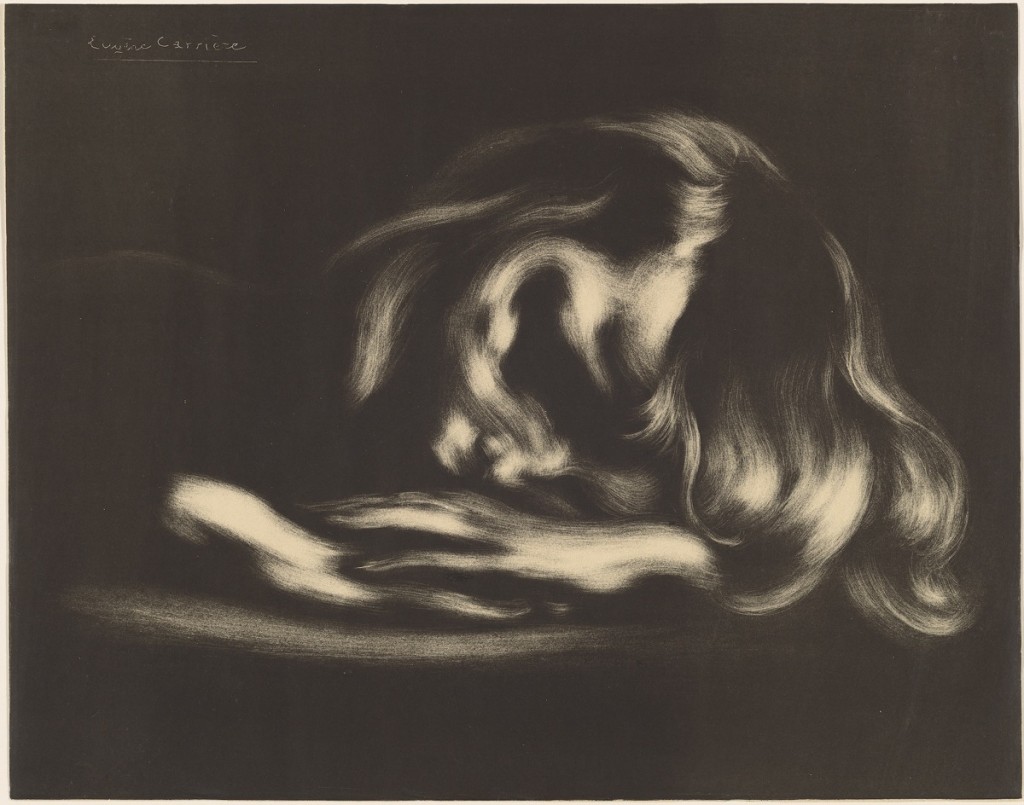 Nan Goldin, whose photographs of her friends revealed a twilight world of entertainers, addicts and melancholy lovers, has nothing on Albert Besnard, whose 1887 etching of two morphine addicts is on display in the exhibition “The Darker Side of Light: Arts of Privacy 1850-1900. This beguiling show of prints, illustrated books, drawings and small, fluid, mysterious bronzes, traverses not only dark private states of mind connected with reveries, madness, love, suicide, domestic violence and rape, it contains prints which express intimate reactions to the public tumult of the age. A view of Paris in which the victims of a cholera epidemic of 1865 sail off in the ill-wind of a terrible human cloud by Nicolas Chifflart and a grieving weaver, her loom and wool waiting in the background, watches a dying child in a dark lithograph titled “Need” by the German Kathe Kollwitz. The print is part of a suit documenting the sorrows associated with the Weaver’s Rebellion of 1897 in Germany.

Curators from the National Gallery in Washington, DC, where the exhibition originated, assemble these works to shed light on media and imagery during a period where there was a reorganization of the boundaries between what we think of as public and private life. Because of their size, discursive or contemplative nature, collectors often stored prints and studied them in private rather than displaying them. The entire cycle of Max Klinger’s wonderfully strange symbolist saga “The Glove or Paraphrase on the Finding of a Glove,” narrating the finding of a woman’s glove in ten fantastic, subtly erotic and non-linear etchings, hangs in the dimly-lit galleries among other intimate, variously decadent, symbolist and realist prints. Etching and lithography build subjects out of inky layers of dark tangled or cross hatched lines, drypoints are perfect for creating atmospheric grays, the medium, in turn, is predisposed to the subjects of obsession, possession and describing the low light of the sick room or the ill-lit corners of the fin de siècle urban world. (Janina Ciezadlo)

Through June 13 at the Smart Museum of Art, University of Chicago.