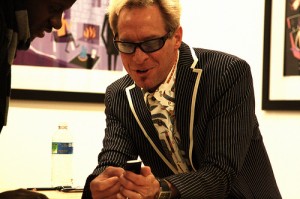 Shag is signing a fez. A line rumbas out the door at Rotofugi Gallery Friday night, grocery-size opaque shopping bags dance at leg length down the line. The crowd for the ambitiously entrepreneurial artist Josh Agle (Shag comes from the middle of his name) and his bright, slightly sinister riffs on sixties cool, is notably older than the usual crowd for the four-year-old adjunct to the store that specializes in toys that never saw the inside of a childhood dream.

“The eventual goal is to have one show a month,” Kirby Kerr, who co-owns the store with his wife, Whitney, says of their fourteen shows set for 2010, “but when we’re booking exhibits I tend to get excited and book too many things.” The bags hold a limited-edition Shag toy, and at the signing table, collectors get the undercarriage of their Shriner car signed. Cameras snap, multiples of digital relics of the art, the artist. On the sidewalk, smokers smoke, leaners lean. Agle looks fetchingly like one of his own drawings, kicking long legs under the table. With black high-top Chucks, skinny jeans, white-trimmed pinstripe jacket, soul patch, blonde tuft and blue-lens sunglasses, he’s like the 3-D version of the works behind him. Of the Ray-Bans, he says, “I got Lasik but then people didn’t recognize me without glasses.”

Agle makes snazzy images with characters that look like him looking like them. “For years his mainstays were Tiki-inspired scenes and a sort of mod sixties lounge-lifestyle pastiche,” Kerr says. “He still keeps a foot firmly planted in a sort of fantasy flat animation-esque world, but now instead of pretty girls and suave guys, it’s insects in suits, but still very dapper.” (Ray Pride)