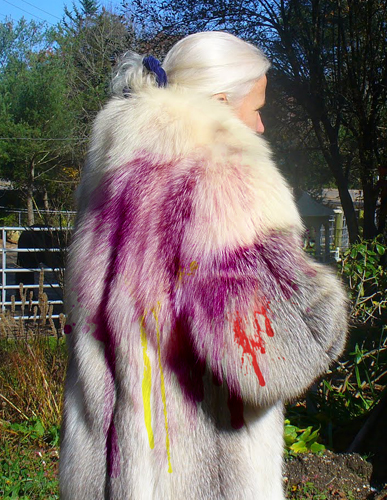 Winter keeps us indoors, and so it’s a good time for contemplation. This past season, there’s been a blooming of art manifestos. When so much feels out of control or beyond the purview of art—job loss, politics as usual, shrinking budgets and attention spans for art—artists take their message back into their own hands, just as they have done for centuries, and address manifestos to the masses. As published online, the Internet is the perfect marriage of medium and message.

In February, photographer and educator Dawoud Bey gave the keynote address to the College Art Association, where he had the ear of art professionals from across the US, and which he later posted on his blog, What’s Going On? The three-thousand-plus-word speech asks a series of questions about the established norms of the art world. Bey’s speeches and blog posts always emit an aura of calm, through which he enacts his activism, but a tone of anger cuts through his present speech. He asks, “Are we ready to rethink the notion of institutional prerogative, privilege, and exclusivity, or is the current institutional climate as insular as ever?”

Bey’s speech strives to empower its audience to build relationships with those who are usually excluded from the arts. “How do we go about making what we do matter not just inside of the institutional space of the college, university, museum or gallery, but outside of it as well?” With equal doses idealism and realism, Bey critiques the institutional systems of exclusion, with an anti-authoritarian, yet sane, message. The fix? “One has to believe that the work of bringing others into the center of the discourse truly matters.”

On Jogging, a new Internet art website, a three-part manifesto was published this January (Jan 2, Jan 5, Jan 13). Although the manifestos are unsigned, the writer(s) frequently use the first person. The anonymity of this manifesto is key to its message, which reasons the imminent disappearance of art objects and physical spaces to exhibit art.

The tone is anarchic: “If the opportunity to destroy art in the museum is the viewer’s chance to be master, [the viewer’s] denial to do so makes them consensual slaves.” It’s a new dawn of Internet Futurism.

As Bey frequently recalls his capacity as a teacher in his speech, the manifestos on Jogging also target the student population, which is perhaps the largest segment of the art community, and where ideas and methods are indoctrinated. “Why are today’s leftist-educated art school students satisfied with and eager to join the most laissez-faire market in America?” The anonymous author concludes, “I want art that is free to experience, free to make, and free to promote. I want Free Art.” Like any good manifesto, this one on Jogging is impassioned, but not always realistic. The Internet is not free, but it is cheaper than running a gallery. To their benefit, the manifestos on Jogging are visionary, and take issue with a specific strand of art. They should be read and wrestled with.

Randall Szott, a blogger who supports non-object-based art practices, and a chef for the US Army Corps of Engineers, published a manifesto on his blog Lebenskünstler, in mid-January. Szott defines the enemy lines—“we refuse to meet on your terms.” Unnamed, the “we” and the “you” are assumed to be artists versus academics and critics. “We are not your intellectual playthings,” he writes, and “we reject your representation and demand our autonomy.” He targets the “theoretical class.” Szott, though, has a taste for intellectualism, evidenced in several public art arenas, so his manifesto seems more a personal reflection or self-critique than public prescription.

“While you wring hands over what it all means, we are trying to change the world, build relationships and communities,” writes Szott. A good manifesto is supposed to organize a community around a meaningful situation or enterprise, and that may mean it can have academic ties, for university professors are often very politically engaged.

A common thread among Bey’s speech, the three anonymous Jogging posts and Szott’s manifesto is an instigation to form community. The do-it-yourself sentiment strikes hard here, as it does often in Chicago. Forget the institutions, they seem to say, and form your own colony of ideas. Chicago’s artists have long held this belief. “Certainly there is no honor in teaching students that their only job is to make their work and to then wait for someone to shower rewards upon them,” writes Bey, critical of institutional conferment.

The DIY method is an invisible blanket that promises safety, and invisibility. These networks and communities, if motivated to grow, form new institutions. Institutions give grant money, provide exhibitions that attract international audiences and distribute information across wide channels. These institutions often include people who are not artists, but who do the work that, if artists performed daily, they would not have time to make art. Art manifestos, like their market-driven counterpart, artist statements, empower makers to keep making, with a focused goal; more should be written, and read.

Thanks for taking the time to read and write about the manifesto Jason. I have to mention how important the title of the post is though: “Draft of a manifesto written in defense of a group of people that did not ask for my defense, using words they would not use and engaging people they ignore.” The title was meant to clarify that it is not really my manifesto, but one I wrote for other people Basically, it was a thought experiment. I was “defending” artists (mostly social practice types) that have been scorned by smarty-pants types for being too… Read more »

thanks for your response, Randall. It would be great to see more reporting on breakdancing, car customizing and fanzines!
Jason