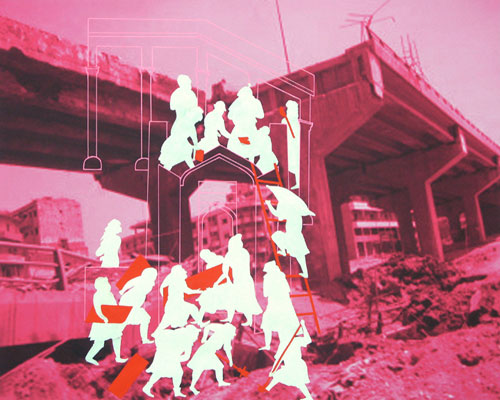 Appropriating photographs of scenes of devastation from the wars in Afghanistan, Iraq, Lebanon and further afield that she finds on the internet; tweaking the images in the computer; and then painting elegant bits of “restorations” into them, Susanne Slavick presents yet another variant of the ubiquitous project of redeeming the ruins. Slavick’s most effective photo-works feature the gutted and twisted hulks of bomb-blasted cars that she has decorated with designs and figures from ancient civilizations. In “Hemorrhage,” Slavick serves up a hopeless wreck from a car bombing in Sri Lanka that she has surrounded and filled with sinuous patterns derived from an illustration in Firdawsi’s fourteenth-century Book of Kings. Although Slavick’s intent is to begin a “healing” process and to slam imperialism on the way, the effect of her images is to fix the viewer in contemplation of aestheticized brutality which arrests and satisfies the eye with its striking juxtapositions and self-sufficient beauty. (Michael Weinstein)

Through April 4 at the Chicago Cultural Center, 78 E. Washington