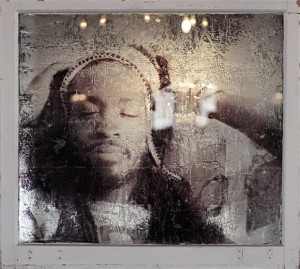 “If you stop and think about it, most people know a handful of people that have lost their jobs,” says Mike Nourse, one of the founders of Chicago Art Department. Nourse and fellow artist Marta Sasinowska, however, have taken a different approach to these tough times. On the second floor of Salvage One, they are showing their new series titled, “Looking For: New Works.”

Nourse and Sasinowska interviewed and photographed fifteen subjects within their community who have been out of work for a period in their life. They didn’t restrict themselves to the literal sense of the title, though, and during the interview process gave the subjects free reign to think of what they really wanted. “It’s not much of a discussion,” says Nourse, “if you just say you’re looking for work.” Nourse and Sasinowska were thinking bigger picture and wanted to inspire that within their subjects. Through the interview process, the subjects were asked to submit five words, things they were really looking for, such as fulfillment, adventure, peace. Nourse and Sasinowska then used those words to create the images.

A sitar pulls friends and fans up the stairs at Salvage One to the second floor, an expansive space with couches, pews, rugs and odd furniture from every era. A late afternoon sun rains through the west wall windows, streaking light along the floorboards. To the right, when you first walk in, you see a portrait on a windowpane of a man with his eyes closed, relaxed and wearing headphones. It hangs in front of a mirror. The title is “Peace,” and even if you do not know him or his story, the image has an incredible calming effect. His name is Chris Hales, and after talking to just about anyone walking around the floor, you get stuttered, emotional tellings of a man who passed away just several weeks ago.

Standing in front of the photo, Aimee Wertepeny, who worked on a show with Hales in November, remembers, “He was one of the guys that would just do something for nothing. Just step up to the plate.” His death was brought on quickly, stemming from an injury during a soccer game, a blood clot turned cancerous. “It was definitely a situation of a lack of health care,” says Wertepeny. “And that’s just disgusting.”

“All of a sudden, I’ve got to work on a piece about someone who just died,” says Nourse. “We had a tough time choosing an image, but at the end that was just him.” Nourse looks back at the picture of Hales, headphones on and closed eyes. “He was that cool.”

Past the photo, in the middle of the room, is a big chalkboard with the text, “I am looking for…” Gallery attendees are encouraged to write their answers, which range from the comedic (Waldo), the less tangible (peace, vengeance), to the specific ($60,000).

Wandering around the open room, you find windows fitted with more portraits hanging against brick walls and white fabrics. Sasinowska has even put an image of herself onto an old fridge.

“All of us were at this point where we’re saying, ‘What the fuck are we doing?’” says Jenn Rosenthal, who appears in a six-paned window on the back wall. “It kind of really lit a fire.” Rosenthal, along with another subject, Rebecca Rounds, talk about the effects of the project. “They [Nourse and Sasinowska] just got me to a really good place,” says Rounds. “They wanted to know about me and my art.”

“It seemed like this really light subject,” says Rosenthal, talking about the idea of looking for work. “But it became a much bigger question.” (Peter Cavanaugh)