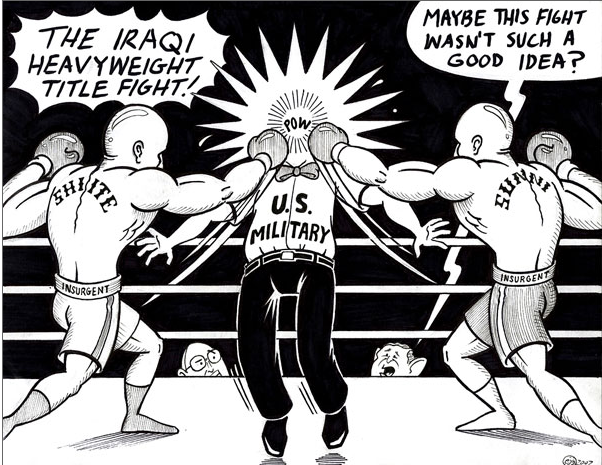 “Every warrior has a weapon and mine is art,” is Eric Garcia’s motto, used as a banner headline on his website. Garcia’s work reduces complex political issues to one-liners. The artist gives us an advertisement for Halloween costumes, “illegal aliens,” of which we can choose the English Puritan, French soldier, or Spanish conquistador. This is a clever and funny piece, but its purpose seems merely to deliver a message. Likewise, Uncle Sam serving us a steaming turd enclosed in wrapping paper represents the Iraq war. The punch lines are clear but the punch is missing.

The rebuilding of Iraq as a parody of “Extreme Makeover Home Edition” is one of Eric Garcia’s funnier political cartoons. You smile, and you get the point. In another piece, standing at the base of the Statue of Liberty, an undocumented family screams up at the words of Emma Lazarus’s poem, “You lie.” Their rage is rendered palpable in heavy, black ink.

This is a radically un-radical show, at times merely re-chewing cliché: Israel and the Palestinians are like Goliath and David; natural disasters are nature’s reaction to a human pest. Aimed at an audience that already shares its stance, the work here shows no interest in educating its viewers. US-funded mercenaries in Columbia could be explained rather than referenced, or, if Jeremiah Wright really breathes the fire of truth, Garcia could offer some hint of how. Likewise, are university textbooks really “the ultimate scam” because one can’t sell them back for the same price one paid for them? There’s more violence and rage in this piece than in Garcia’s commentaries on genocide, which reveals much about this “warrior” artist.

More dangerous, however, is the implication that, since oppression and corruption are always present in history, these forces are monolithic and eternal, like the yin-yang of soldier and insurgent that Garcia draws to represent what he takes to be a self-fuelling and self-perpetuating conflict in Iraq. The context-grounded particulars of history are thus replaced with myth.

While Howard Zinn is beatified in one cartoon, his teachings are ignored. Perhaps Garcia shouldn’t have sold the book back so soon. (Spencer Dew)