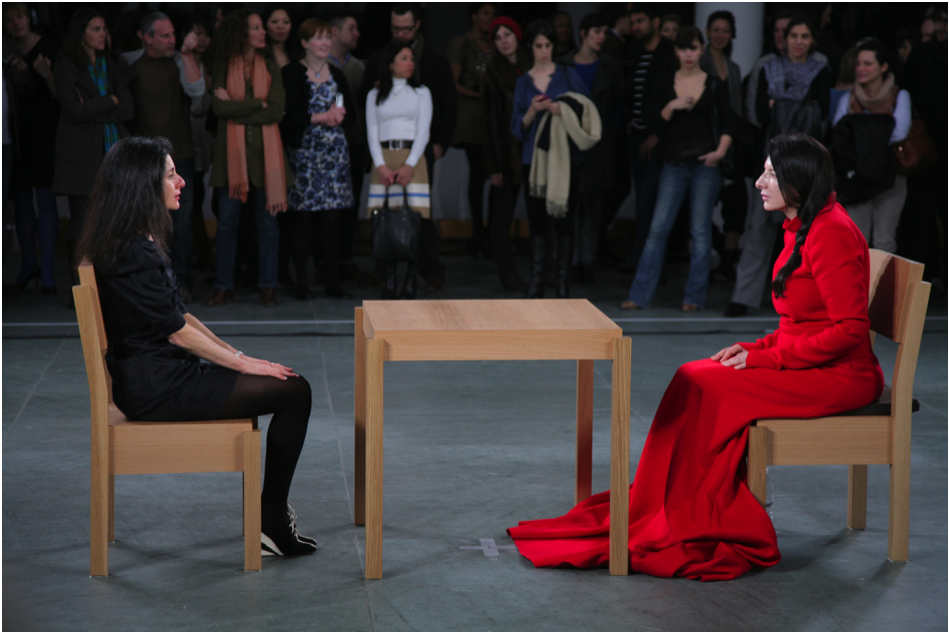 It was a staring contest, and we all had a staring problem. Around a square we stood and sat around Marina who sat and stared at us, one by one, in a chair directly facing her. The scene was solemn and serious. Marina always wins the staring contest.

When we weren’t staring at Marina, and she not at us, we stared at each other, each other’s clothes, hair, shoes, tattoos, necks, all over. We also stared at naked women and men performing Marina’s greatest hits, such as naked woman with skeleton, floating naked woman deity, and a doorframe flanked by naked people.

Presiding over her own retrospective at the Museum of Modern Art, Marina Abramovic conducts a new performance, whereby she sits at a table and eye stares whoever sits across from her, you, me, whoever. No speaking is allowed once you’ve entered the arena. Just eye interaction. Marina is not naked, as she has been in many of her previous performances, but here wears a long, very long, dress with sleeves. It’s matronly garb compared to her usual nudity, as if she is more mature now, which she is.

Staring straight into the eyes of Marina, or anyone, promises a revelation of the soul, a pure connection of being. Or does it? Marina is no oracle, and surface characteristics are no measure of the mind, psyche, soul, whatever. Asked if she is a masochist, Marina says no. But she has courted the perils of extreme body art performances, including cutting and self-mutilation, hardcore repetition, denial of pleasure and the acceptance of pain, and still she is no masochist. Instead, she is a performer, like an actress whose manners are scripted and secondary to the stuff of daily life.

So, if Marina invents a second life, an artist persona, then why stare into her eyes? What information is exchanged? Where is Marina inside there, behind that calm, waxy face? When we sit with her, what do we expect? What are we waiting for?

The staring contest affords us a moment of solitude in the presence of other people. Like riding on the silent rush-hour train. It is a pause in the middle of a very busy routine. It may not add up to anything substantial or tangible, but it is rewarding, like sleep. A productive emptiness. “Like a small park in the middle of a big city,” writes Margaret Hawkins, about the place of intellectual and poetic ponderings amid the crush of work, politics, and routine. A garden or refuge. A breezy oasis in life’s urban hellscape. That’s art—a minor but meaningful inversion of life. 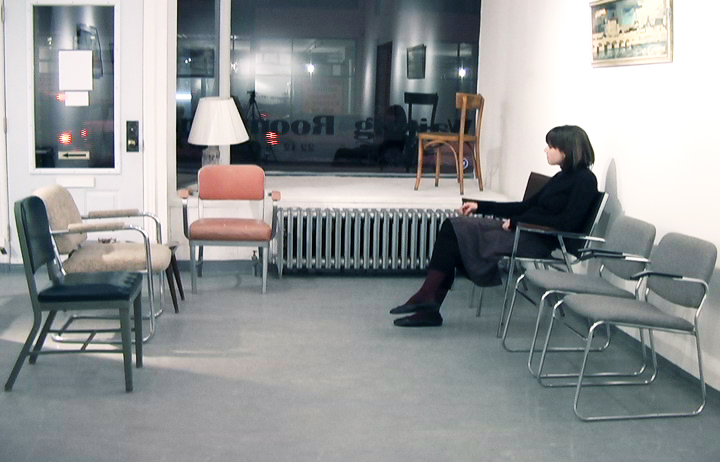 Visitors to Marina’s gaze are given no time limit, no five-minute warning, no tap on the shoulder to exit, just an internal hourglass. You get what you need from Marina and her font of extended vision. So, too, will visitors be given the freedom of time in a performance titled “The Waiting Room” at Spoke Gallery, on March 27, from noon to 8pm. A waiting room will be assembled for the simple purpose of waiting. Waiting for what? Just waiting.

The waiting room will look like a waiting room. There will be seats, of course, and reading materials, light music, plants and a water cooler. In the waiting room your time is your own. You may mark your time with a punch card, but that measure is of no importance if visitors “make their idle time count,” says organizer Stephanie Nadeau. She facilitated a similar waiting room experience five years ago in Montreal. The Chicago waiting room will be open for eight hours, and drop-ins are welcome.

In a busy world, where there’s ever more things to get done in a day, why institute a waiting room—especially a waiting room to nowhere? In performance art, endurance practices are held in high regard. Pain is rewarded, and what is boredom if not a little endurable pain? Waiting rooms are the sites of a strange modern ritual, holding tanks for people, but The Waiting Room performance hopes to subvert the oppressive grab of time. One can emerge from the waiting room of an endurance performance a little bit changed, if you care to be.

In The Waiting Room, a camera will capture the activity of participants at even intervals of time. So, too, in Marina Abramovic’s performance is a live video feed available for viewing on MoMA’s website. In both cases, it’s as if the pain of transformation does not count unless somebody else watches. With performance art, there’s always a “I was there” factor. For late-comers there is photo and video documentation, because art, no matter the medium, needs to be seen. Public decorum tells us not to stare at others, but in both The Waiting Room and Marina’s new performance, staring is sanctioned. We do our best and our worst when we know we’re being watched.

The Waiting Room is open for waiting at Spoke Gallery, 119 N. Peoria, on Saturday, March 27, from noon to 8pm. Marina Abramovic’s retrospective, “The Artist Is Present,” is on view at the Museum of Modern Art, New York City, through May 31, 2010.