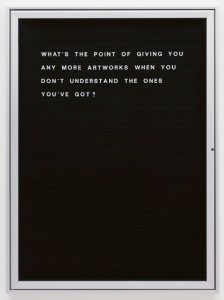 Editor’s Note: This is a  part of a package of stories about the state of criticism. See the links at the end for the related stories.

Last year, the popular art podcast Bad at Sports shut off the comments section to its weekly website component. Responders got out of hand with insults, and it seemed the negativity far outweighed useful commentary. In those four years of unmoderated feedback, some discussions ran on for more than 200 comments, which in the realm of Web 2.0 equals a successful dialogue. And isn’t the art world always begging for more “dialogue”?

Withstanding the attacks of a belligerent audience is just one challenge of living on the web. The other challenge is content, or how to craft responsible, poetic and meaningful criticism when there’s no overhead, little foresight and no time. Worrying about editorial is “like organizing the kitchen cupboards while some dude bleeds to death in the living room,” writes Kathryn Born, publisher of a new art criticism website, Chicago Art Magazine. “We publish two unedited articles each day. It would be nice to have someone look them over, but we just don’t have the money.”

It may not matter whether or not art criticism is vetted, edited and consciously published. Published criticism means exposure, and exposure means free publicity, or just another line on the resume, as several artists confessed to me.

“Public acknowledgment is primary, critical assessment is valued to a much lesser degree,” says critic and artist Michelle Grabner. She continues, “The fact that recognition takes the form of criticism doesn’t matter to artists. Poetic reflection or a mention in the society pages is just as touted by artists and their dealers.” Is this true? Gallery owner, and former art blogger, Scott Speh tells me that he’s disallowed several local critics—both web and print-based—from interviewing the artists he represents at Western Exhibitions, and if they review a show, he won’t list it on their resumes. Reviews do pad an artist’s resume, but a strong resume leads to more opportunities to make more and better art. Granting institutions, residencies, curators and dealers often consult resumes. It’s an attempt at professionalism in a highly unregulated art world.

Whether ignored or acknowledged, clipped for PR or thoughtfully considered, reviews help spin the art world on an axis of its own making. Anyway, making money from an art career shouldn’t be so stigmatized. It feeds the monster. It perpetuates the machine.

But sometimes the machine is a website called The Instant Art Critique Phrase Generator, which randomly pieces jargon into strings of art speak. This website reveals how easy it is to praise mediocrity. It could pass for published art reviews.

Artist and critic Elijah Burgher draws out an interesting conflict. As an educator, he believes that “knowledge is common property,” to which we all contribute. He co-published a short-lived art journal called Blunt Art Text, in print and digitally, and believes that “criticism makes for healthy discourse, which makes for better art.” However, he says, “If I want to know something, I’m not going to read Jerry Saltz’s Facebook posts. I’m going to hit the library.”

We meet in public, shake hands in public, exhibit art there, publish reviews there. With Web 2.0, the public field has been torn open, perhaps inelegantly. But that’s how revolutions go. As things settle, taste levels thin out or flatten. “Group thinking tends to create the average,” says Elijah.

With the entire public sitting online, we need something to occupy our time, and there is enough content on the Internet to fill it. Pile on the monthly art magazines and there’s almost too much to digest. But there are tools to better organize all this information, new and old (as old print becomes archived online). “There is a reason for newspapers to exist, but magazines and newspapers have to adapt to digital audiences,” says Alicia Eler, who worked for Chicago Now, the Chicago Tribune’s new blogging enterprise, and is now a freelance social media consultant and art critic. Digital audiences like to be able to search information easily, talk to themselves, and be heard.

There aren’t more artists in the world since the dawn of the Internet; it just seems that way because they all have personal websites. As a tool for artists, Web 2.0 is hugely successful. “The art community is more active on Facebook than Twitter,” says Alicia. It’s a good place to organize, build fan bases and post new art for instant response.

Positively, online social media increases the size of one’s network, which increases the possibilities for collaboration and the exchanging of ideas. Negatively, information tailored to a digital audience promotes emotionally reactive and flippant responses, and somehow seems unserious. This is not, traditionally, how critics like to proceed.

As the Internet is all about audience, and its influence expands, the voice of the critic fades. For some types of art, like community-based or social practices, this is ideal. For others, it’s an unwelcome flood of amateurs, hobbyists and Sunday critics. Today, anyone who posts anything on the web is heard and receives attention. But the need for expertise, and good writing, will resurface. The public should demand it.

Everyone’s A Critic: Yelp, Twitter and the end of Western civilization?