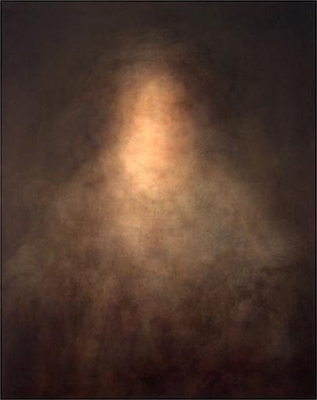 Having gained repute for designing his own software processes to produce images that comment on art history and pop culture, Jason Salavon insists that information technology is, for him, “a means to an end,” although he admits to having “weird nerdy fun” manipulating the computer. His overarching end, says Salavon, is to “distill the complexity of life to make it more understandable.”

In his new digital photographic work on exhibit at Tony Wight Gallery, Salavon presents three works, each of which “averages” a number of different portraits by Rembrandt, Velazquez and van Dyck, respectively; that is, mashing them up into composite images in which the subjects come out etherealized into ghost-like figures bathed in incandescent auras. From normal viewing distance, the subjects are effaced, but on close inspection, the outlines of facial features are visible and a bit ghoulish. Salavon says that his intent was to set up a play between the styles of masters who were contemporaries, leaving it to viewers with a “cynical look” to judge that he has eliminated differences, and the more discerning to notice distinctions

Salavon also offers up three digital photographic images of simulated mammal skulls that were generated fully in the computer and represent no creature that has ever walked the earth. As with the composite portraits, the skulls are somewhat monstrous, all of them sporting a fang. Salavon says that he was seized by the conceit of filling in missing branches of the evolutionary tree. 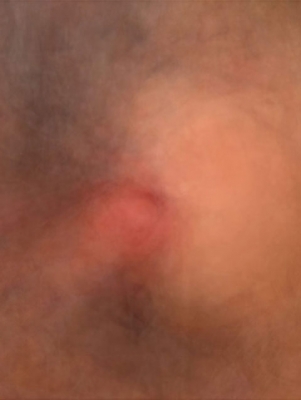 It would seem that Salavon has achieved the very opposite of what he claims to have set out to do; rather than making human experience—what William James called a “blooming and buzzing confusion”—more intelligible, Salavon has compounded the world’s felony by augmenting uncertainty.

The disparity between intent and effect can be explained by Salavon’s creative process. Not the conceptual artist that his technical expertise has led people to believe he is, Salavon proceeds by intuition; he explains that he has flashes of ideas and then develops them as his bodies of work take on cyber-flesh and he reflects on his results and the associations that they suggest. He insists that he is engaged in a multi-faceted “exploration,” and his art bears that out.

Viewers who attended the opening were most attracted by Salavon’s techniques and his virtuosity in deploying them to create images that provide new visual perspectives, rather than meanings. Todd Hadley praised Salavon for expanding the boundaries of perception and generating new forms of abstraction.

Turning 40, Salavon, who is based in Chicago and has exhibited extensively, has settled into a creative groove that takes him in many different directions, yet has not been distilled into a crystallized meaning. He is fascinated by his intuitions and revels in his techniques, and he lets them lead him where they will. (Michael Weinstein)