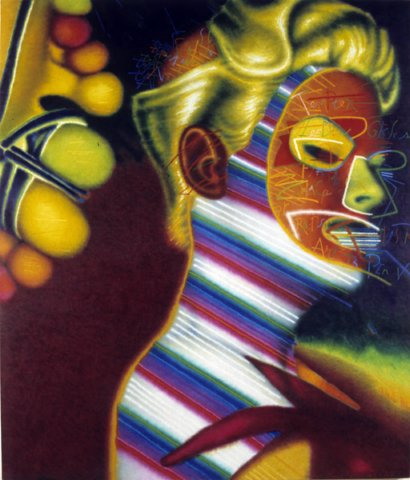 Ed Paschke’s legacy has had an incredibly prolific past several years—despite, or perhaps because of, his death in 2004 at the age of 65. Currently, a dual exhibition titled “Ed Paschke’s Women” is being shown at Russell Bowman Art Advisory and Alan Koppel Gallery, both in River North. Simultaneously, at Gagosian Gallery in New York, Paschke’s work is on view in a show curated by Jeff Koons, a former student and studio assistant of Paschke, whose large monographic exhibition at the Museum of Contemporary Art, in 2008, featured a small side exhibition called “Everything’s Here,” which incorporated some works by Paschke.

Perhaps the trend began in 2006 with the excellent “Ed Paschke: A Chicago Icon” held at the Chicago History Museum, featured a partial re-creation of the artist’s studio and a work in progress at the time of his death. It revealed the very traditional approach to oil painting that Paschke took, beginning, as the Old Masters did, with an under-painting of black and white, which lent his figures their juicy volume, followed by an over-working of color, sometimes in slick, thin glazes, and sometimes in sculptural, thick impasto, accounting for the depth that his paintings achieve.

Drawing inspiration from printed and filmic source material, his early paintings, on view at Russell Bowman, exhibit a pastiched approach with hard edges and loads of film divas rendered in black and white and baring it all. As the works progressed into the seventies, Paschke began combining socially acceptable, sexy stars with their dichotomous counterparts from marginalized subcultures, replete with their sexually deviant, physically abnormal and self-mutilating behaviors, such as tourniquets and full-body tattoos.

As Paschke’s inspiration grew to engulf televisual materials, his imagery became more synthesized and a diffuse electric glow, partially emanating from his chiefly neon color palette, disintegrated edges into a soft focus. The surfaces got shallower as he interrogated the TV screen, and later computer screen, and disparate elements were overlaid as opposed to collaged together, as in his signature wrestling-mask facial covers that leave only a figure’s realistically rendered eyes, nose and mouth poking through.