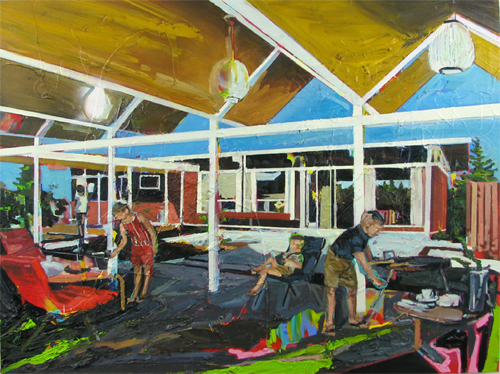 Suburbia today may not be the quiet, two-car-garaged perfection it strove to be in the days of “Leave it to Beaver,” but the essence is still there: in the middle ground between rural and urban, the suburbs are protective and stagnant, social and nurturing. The place many of us first called home, suburbia often evokes nostalgia and something else—something it took leaving to finally see. That “something else” is well illustrated in James Olley’s “In Motion,” where garish portraits of children on trampolines and transients on benches cast a scrutinizing lens on the inhabitants of interloping environment. Olley’s subjects are uninhibited and unrepentant, fully inhabiting the spaces in which they exist. Works such as “Victory” rile discomfort in the viewer, pairing camaraderie with hazing in aggressive strokes of black around pink, peach and teal bodies, while others, such as “Left Behind,” halt viewers with an increasingly common figure—the homeless—stranded in such an insular environment.

Previous exhibitions by Olley have featured mutilated portraiture and suburban-style architecture, and his taste for the two blends well into the Technicolor mêlée that is “In Motion.” Vivid and messy yet emotionally cool, Olley’s work awakens a time and space that most of us have long since relegated to the farthest reaches of our urban minds. (Jaime Calder)

Through May 8 at Kay Art Projects Gallery, 215 N. Aberdeen.