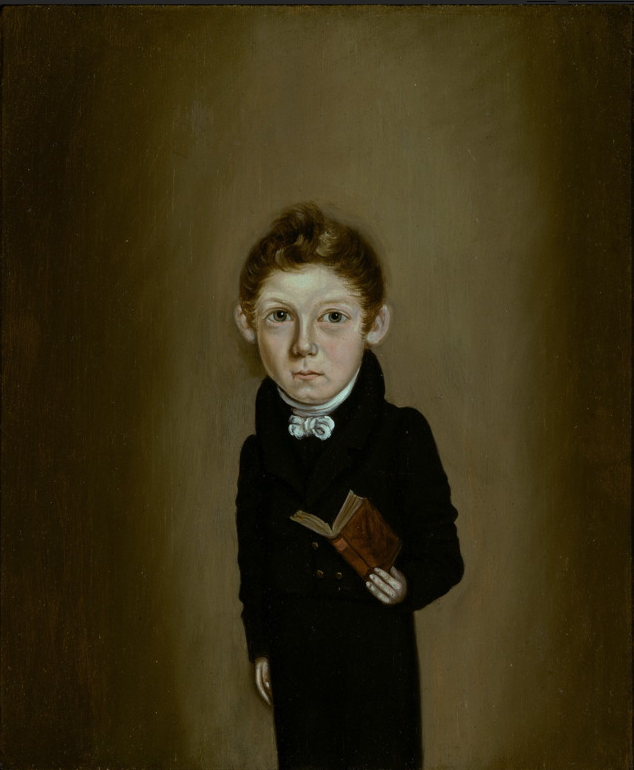 If the Art Institute had an attic, it would look exactly like Gallery 227, a strange narrow hallway on the second floor that wraps around the brick dome of the Ryerson Library. Until last year, it held temporary exhibitions of architectural drawings and models. In the recent reinstallation of the museum’s permanent collection, architecture and design moved to the Modern Wing, and Gallery 227 now houses the American Folk Art collection—except that not all of it is American, and it’s only “folk” because it defines a period of American art before modern European styles dominated the scene.

For example, there are commercial ceramics from Stratfordshire and Mexico, which are only American in that Americans once collected them. There is a fine set of nested baskets made by a specialist on the New York Stock Exchange as “a release form Wall Street’s pressures.” There is also a perspective view of Roxbury, Massachusetts by John Penniman (1782-1841), a highly skilled former assistant to Gilbert Stuart. If these two are “folk artists,” then who isn’t? So, like an attic, this gallery is full of surprises, including some fine portraits by a local hero of the underground railroad, Sheldon Peck (1797-1868), a professional artist who lived in Lombard, Illinois. And, of course, there’s plenty of old furniture, though not every attic has a transcendent Shaker sewing desk like the one found here. There’s almost enough great wood carving to have a gallery of its own, including a crucifix by one of New Mexico’s famous Santeros, Jose Benito Ortega (1858-1941), and a newly acquired carving by Leslie Bolling (1898-1958), who was almost a star of the Harlem Renaissance. There are also some significant omissions. Where are the toys, dolls, rifles, tools, iron work, and silverware? Hopefully this gallery of surprising stuff will eventually go into permanent rotation. (Chris Miller)

On view at the Art Institute of Chicago, 111 S. Michigan. Digital catalogue of art on view in gallery 227: http://www.artic.edu/aic/collections/search/citi/gallery%3AGallery+227