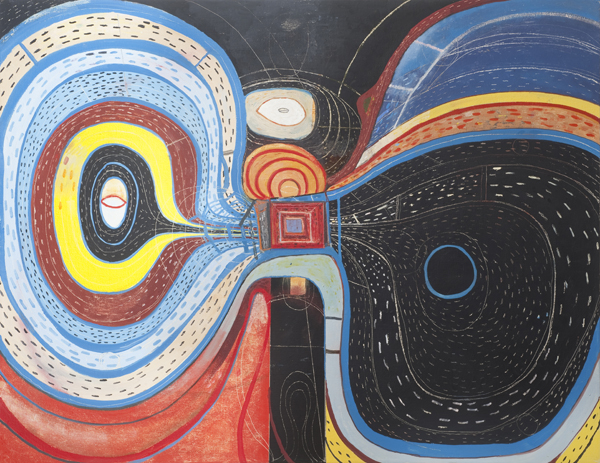 Richard Hull is a painter’s painter. Forgive the trite expression, but in this case it’s an accurate observation. A host of other renowned painters were in attendance at the opening of Hull’s latest solo show, a few weeks ago, at Western Exhibitions, carefully assessing Hull’s latest group of abstractions. Given their depth and the range of activity involved, the paintings deserve the attention. Their bearings on the external world are numerous, resembling magnetic fields, circulatory systems, topological mathematics, topographies and, or, transportation systems (speaking only of the most obvious examples), though these associations seldom impose upon the viewer’s imagination. The guiding principle required for their interpretation: make of them what you will, and do enjoy yourself.

Hull has been living and working in Chicago for nearly three decades, spending the entirety of that time as somewhat of an institution in the city’s fine-arts community. Those familiar with his work—there are many—praise it for the same qualities one praises in a good jazz musician: lyricism, rhythm, spontaneity and energy; moreover, though one may not view Hull’s work exclusively as the embodiment of jazz music’s principles in visual form, these principles are certainly a dynamic force behind his artistic ethos. 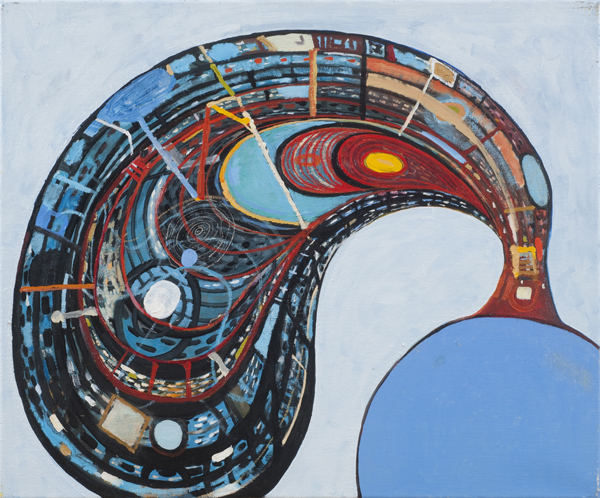 It’s not surprising to find that Hull’s resume includes a few collaborations with jazz musicians. Hull and Chicago-based jazz saxophonist Ken Vandermark have worked together on occasion, including a memorable live jazz and drawing session at the Arts Club in June 2001. The paintings on display at Western Exhibitions developed from an invitation to co-design the backdrop for a Vandermark performance at the 2005 Outer Ear Festival hosted by Chicago’s Experimental Sound Studio. Tasked with rendering a Trojan horse on the 10×14-foot backdrop, Hull and collaborator Dan Grzeca decided to split the work into a two-part exquisite corpse. Grzeca drew the head, and accordingly Hull did the ass-end of the project. Hull continued working with the form he conceived during the backdrop project, a tightly cropped, kidney-shaped tail filled with concentric paths of abstract activity. Two of these works, “Man with a Horn” (2009), and “Emptying” (2009), appear in the current show.

Somewhere in the process, the single kidney-shaped protrusion was doubled, lending the magnetic field motif that prevails in the work at Western Exhibitions. “Night and Day” (2009) is one of the largest canvases, and the cumulative crescendo to Hull’s engagement with the forms—a hard-earned victory where, within the one picture, as in many of the pictures, a satisfying balance is struck between competing shades, shapes and hues. (Nate Lee)

Richard Hull shows at Western Exhibitions, 119 North Peoria, through May 1.