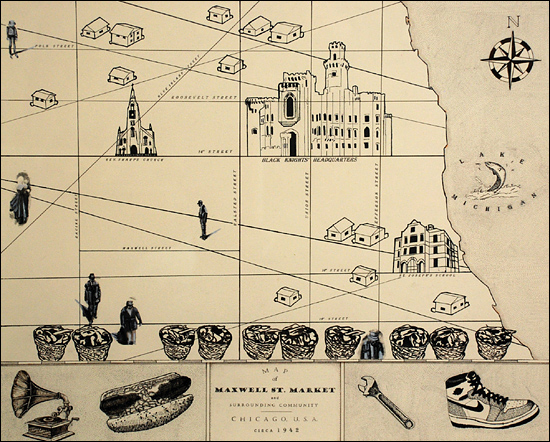 The African-American community of Chicago’s “Black Bottom” neighborhood, dispersed by white “urban renewal” in the 1950s, is presented here in a mix of faux historical documents, artifacts and maps, colliding a repertoire of symbols associating European racial and nationalist mythology with African-American history and nationalism. There is a knight’s helmet, for instance, incorporating a raised Black Power fist in its design. Likewise, the black panther becomes the center of a heraldic tapestry that, in this case, is a quilt. Corporate and local icons such as the Nike Swoosh and the Maxwell Street Polish take on the aura of legend when isolated from their daily contexts and presented as symbols of a lost world.

In one entrancing piece, Weaver represents Chicago in the form of a classical T-and-O map (wherein the world is presented as, say, so many fragments of land circling around Jerusalem). Chicago’s “Municipal Device,” a Y-shaped symbol that marks city buildings and vehicles, is already a revision of this concept. The symbol is actually a stylized chart of the city, the Y-shape representing the Chicago River with its branches. Weaver, engaging the earlier tradition of the T-and-O map, makes this common (but perhaps relatively unnoticed) symbol seem strange. For his map, Weaver shifts perspective such that “North Side” and “South Side” take up corners at the bottom of the map while “Black Bottom” (a neighborhood roughly southwest of the Loop) is given prominence at the top, the Chicago and Illinois rivers splitting off the sections and the circle around the whole standing for Lake Michigan.

“T.O. Map with the Black Bottom in the Most Blessed Position” is sure to jar viewers with its seeming “distortion” of geography. But part of Weaver’s point with this intriguing show is that all maps are reflective of bias, offering a selective view. Likewise, all histories are narratives of desire, stories told about the past reflecting fears and longings, privileging certain characters and values, quickly morphing into myths. Europe’s fabled knights in shining armor were once earthy warriors as real as any sausage vendor on Maxwell Street. Their canonization of icons is much like the centrality Europe occupies on most maps, where north points up and certain territories are pushed to the margins. Weaver’s show, through sculptures and drawings, explores these dynamics in unexpected and rewarding ways, commenting on a real past via fiction and myth. (Spencer Dew)

Through May 8 at Packer Schopf Gallery