Peter Otto’s putrid palette befits his ghoulish subjects. He is a painter of the dead and the dying.

Contrary to the literal documentation produced by photojournalists, Otto employs painterly abstraction for the purpose of preventing fixation upon the graphic details of the horror he depicts. He, like most good artists, requires his audience to move beyond the particular and toward the universal, and constant, in human nature.

Otto isn’t common. Knowledge of the art and history of Modernity seem to be prerequisite to access the deeper levels of meaning available in his paintings. The selection of works on display at Devening Projects directly considers the distance of time and space extending from Europe in the 1940s to the present-day Middle East. 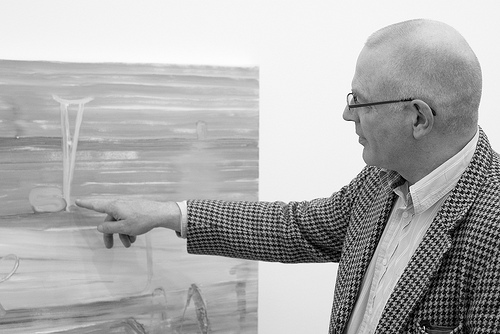 In turn, viewers of Otto’s paintings are forced to consider the relationships that may exist between a human skin stretched taut to form a lampshade and the fabric of a tent set in the desert.

What does one thing have to do with the other? Why establish such a parallel? Well, “cruelty” is one short answer. A better and longer exegesis might entail consideration of the propensity of man to cause harm under cover of the name of “good.” Systems of belief, or ideologies, are the real topic of Otto’s work. Emptied of their humanity, Otto’s subjects are simply placeholders for bad ideas. And so we see men and coffins containing death: each in their own manner.

Found most bluntly in the title, “Hand of History (Ode to John Heartfield),” is Otto’s acknowledgment of art-historical precedent. Yet more incisive than the textual citation of Heartfield’s name is the visual reference from the same piece, wherein Otto seems to wholly appropriate the central motif of Heartfield’s 1934 montage, “O Christmas Tree in German Soil, How Crooked Are Your Branches.”

In Heartfield’s oeuvre, symbols with otherwise positive connotations were as a matter of routine co-opted and remade into Nazi emblems. So that Heartfield’s “Christmas Tree” suffered a deformation of its limbs, producing a swastika. Otto appears to lift that tree-become-swastika, that cross-shaped thing with arms bent at right angles, setting it again in an arm bent at a right angle.

That act of transplanting ought to begin the real debate. (Paul Germanos)