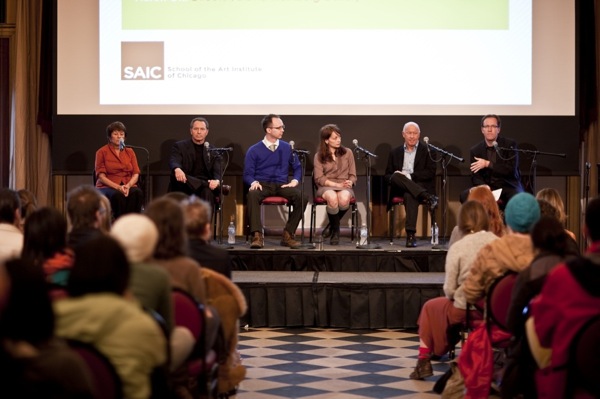 Wellington “Duke” Reiter moderated a panel discussion at the School of the Art Institute last Wednesday, April 7, just one day after announcing his resignation as the school’s president, a position in which he served for two years. The panel discussion, titled “Creative Economy: Galleries, Artists, & the Market,” was convened to give post-graduation career advice to art students and alumni. Much advice was prefaced with the phrase, “In this economy…,” reminding everyone that a multi-thousand dollar college degree does not itself fling open the doors of success. The “Creative Economy” panel was one visible manifestation of Reiter’s attempt to introduce concrete and realistic career awareness in an art world where tight-lipped luck often dominates.

The panel consisted of the cast of characters that an artist could expect to encounter among the various stages of a commercial art career. There was Shannon Stratton, founder and director of Three Walls; David Weinberg and Aaron Ott, gallerists from David Weinberg Gallery; Rhona Hoffman, a dealer with thirty-plus years of experience in Chicago; and Larry Fields, collector of contemporary art and museum philanthropist. They represented the several forces, extrinsic to an artist’s talent, that, in the best circumstances, guide an artist to commercial viability, from the experimental art space (Three Walls) to placement in museums and collectors’ homes (Larry Fields).

There is no science to art-world success, and not even a popular reality TV competition can guarantee sales and/or respect, but “you have to use the system,” said collector Larry Fields. And what, exactly, is “the system”? All the panelists agreed that self-promotion and marketing is important, including having a personal website—except Rhona Hoffman, who admitted to not having the time to look at artist websites. How does she find out about new artists to potentially show in her gallery? Word of mouth from trusted sources, she confessed. Hoffman provided doses of reality rather than inspiring platitudes (all you need is talent, was the mantra-lie from the other panelists)—but at least she was honest  (don’t come knocking on my gallery door, she warned). The chances you’ll be a famous artist are “one in a million,” she said, so “get another job.” At one point Hoffman blew an air kiss and a wave to a friend in the back of the room. A couple of students up front chortled at her showy affection, but Hoffman shut them up with a searing, pursed lip gaze. You have to play the system, or the system shuts you out. 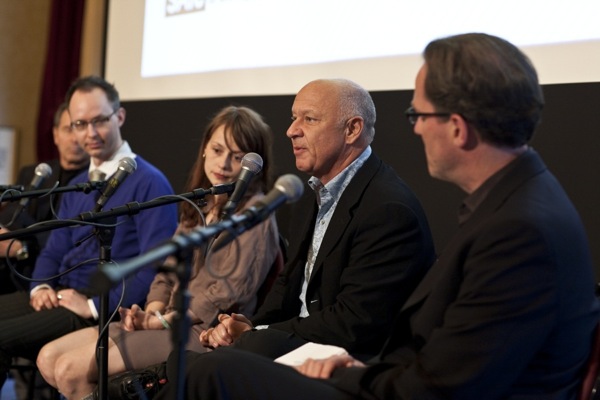 Question from the audience: In which venues should an emerging artist exhibit to receive the most positive attention? How does one build the strongest resume? Most of the panelists gave the surprising answer that they don’t consider resumes, only the actual artwork. Unfortunately, nobody called bullshit. Resumes are extremely important in the arts. Granting agencies, curators, collectors and critics review them to glean all sorts of information. Even galleries keep them in binders at their reception desks for public perusal. Of course, great art speaking for itself is the ideal, and since we all like great art, no one wants to admit otherwise.

“Know your place,” was a great piece of advice—again, from Rhona Hoffman. What kind of artist are you? She begged us to consider. Know your price point. Know your place within art history, or outside of it. There are many art worlds, she reminded the audience, even though only one art world was present onstage—the monolithic, white-cube-gallery world—the goal and pitfall of most art-school graduates.

A student with a fledgling Wicker Park apartment gallery asked the panelists for some start-up advice, but they seemed thrown off guard, even though they were there to promote the entrepreneurial spirit. Quickly they agreed that the city’s farflung and fringe galleries should all be located in one or two convenient gallery districts, namely the West Loop and River North—that is, if they want to be part of The Art World, not one of those other art worlds.

After about an hour and a half, the collected platitudes, conflicting pieces of wisdom, and unhelpful generalities came to a foggy end. President Reiter’s hopes to centralize the knowledge needed for success, and his attempts to cut through the mystique of art world ascension, seemed dashed by his own panel. Even though the art world thrives on newness and revolution, it is also often resistant to change.