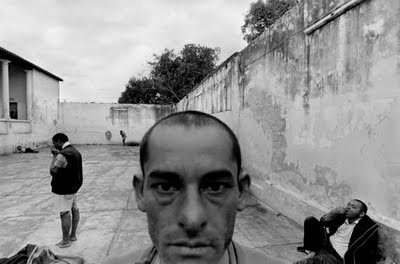 As Chicago’s premier space for showcasing contemporary critical social photo-documentary, the Gage Gallery has come up with another searing exhibition, this time of Eugene Richards’ unsparing black-and-white shots of the inmates of mental hospitals—they would be better called madhouses—in Armenia, Hungary, Mexico and Paraguay. The insane asylum is no bed of roses even in the most progressive Western institutions; outside advanced industrial democracies, it remains an impoverished bedlam, nowhere more so than in the Neuro-Psychiatric Hospital in Asuncion, Paraguay. For sheer agony, nothing could possibly match Richards’ shot of a contorted woman screaming and grasping at the broken panes of the window of her cell as she extends her feet through their open spaces in a vain and desperate attempt to liberate herself. And that is only the beginning of what Richards calls his “procession of them,” in which one image after the other strikes the eyes of the beholder with pity and horror. To call Richards’ subjects the wretched of the earth would be a gross understatement; in Asuncion, abject suffering achieves its limit. (Michael Weinstein)

Through May 14 at the Gage Gallery, Roosevelt University, 18 S. Michigan.