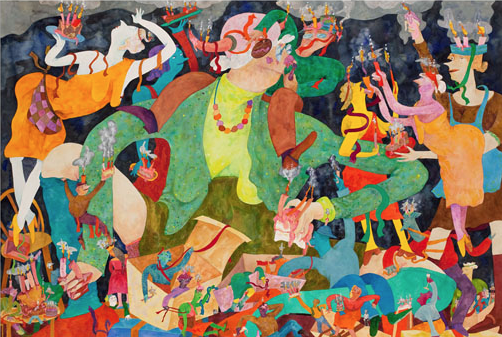 Noodle arms and legs akimbo, a multitude of figures dance across the walls of the Ukrainian Institute of Modern Art (UIMA) in a brightly colored survey of the work of Chicago painter Gladys Nilsson. Organized by the UIMA, in partnership with the Illinois State Committee of the National Museum of Women in the Arts, the exhibition coincides with Nilsson’s seventieth birthday in May, and is a joyful celebration of her life and work.

As is indicated by the sheer masses of elongated people crowding her paintings, Nilsson’s work continues to exude a Chicago Imagist style. The Imagists, a loosely defined group of Chicago artists working in the 1960s and 1970s, were often known to have an irreverent focus on the figure, and used imagery culled from advertising, comics and non-Western art. Pointy-nosed women predominate in Nilsson’s paintings, their bodies bending and distorted. The figures are often floating in narrative scenes that are filled with marginalia both familiar and otherworldly, reminiscent of the fantastical paintings of fifteenth-century artist Hieronymus Bosch.

Nilsson’s most recent painting, a large watercolor titled “Big Birthday Gladys,” was created specifically for this exhibition. With an always-present sense of humor, Nilsson depicts herself comically sprawled in the center, complete with drooping décolletage, clutching a slice of cake while surrounded by celebrating people. The horned helmet on her head is a nod to her Swedish ancestry, and a bespectacled man (presumably Jim Nutt, Nilsson’s longtime spouse and fellow Imagist artist) perches on her shoulders while daubing paint on her nose. One small square sketch exists for this painting in a case in the center of the room, displayed amongst a fascinating array of sketchbooks and ephemera selected by Nilsson herself. (Julia V. Hendrickson)