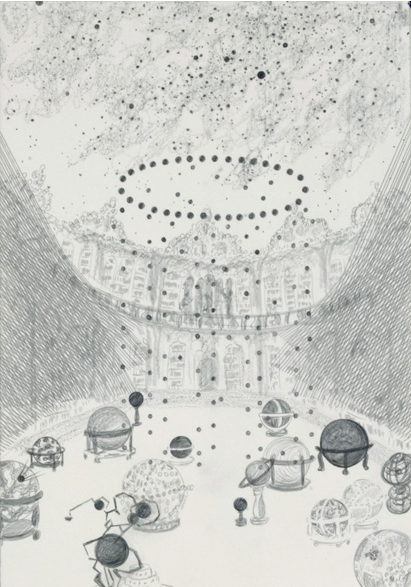 Michiko Itatani is on a spiritual quest, not just in her current paintings, but in the entire sequence of nine themes that have spanned forty years of her career. With titles like “Movement,” “Body,” “Self/Others” and “Micro/Macro,” she has systematically explored the natural and human world within and without. As she moved further into the new millennium, she finally left our suffering planet behind, especially in the two parts of her latest series that she calls “Personal Codes.” In one part, “Hyper Baroque,” she presents interior views of what seems to be a spaceship. The interior looks like a fantastic hotel ballroom, somewhere beyond O’Hare, but it also contains a library with sixty-foot-high bookshelves and globes for each of the planets that it has visited. All this imaginary architecture is wonderfully luminescent. Beyond that, she has envisioned what a Buddhist might recognize as the “pure land” or “Western paradise”—that empty but sacred place that has been the goal of Japanese culture since the eighth century. To stand in a room enveloped by Itatani’s wall-size gray-and-white “Moonlight/Mooring” paintings is probably as close as any of us are going to get to achieving it. Which is to say, these paintings belong in a temple rather than a living space. Almost all these paintings feature a mysterious necklace of lights that seems to indicate a supra-human presence. The evident craft in all of these productions is staggering. (Chris Miller)