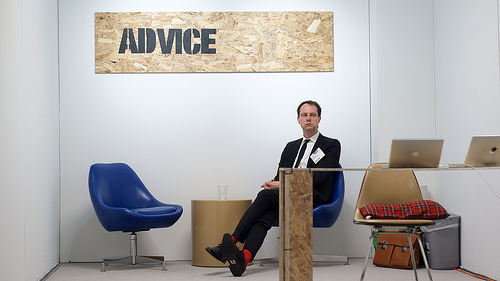 Olof Olsson, The Suburban's booth at NEXT. Photo by Paul Germanos.

This year I had a bit of a different perspective on the art fair. It was the first time that Newcity exhibited our Breakout Artists, and in addition to selecting the artists for the cover story, I installed their art in our booth, on the twelfth floor, in Art Chicago. During installation, gallerists scrambled to unpack crates, boxes littered the hallways as rock music spread over the speakers, carpenters and electricians with handcarts scuttled about the booths like bees in a hive. Some booths, reserved by galleries from farflung locales, remained volcano-delayed and empty until the zero hour when their crates finally arrived. Bulbs were screwed into place, sculptures dusted, the music turned off, and then there was an eerie calm. The gallerists sat down at their tables, applied lipstick, straightened ties, and waited. Although I’ve installed exhibitions before, it was a humbling experience to see hundreds of galleries prepare for a massive opening in tandem. I wanted them all to succeed.

For as much hope as the art fair stirs in me, it delivers an equal amount of dread. Though we were a show booth only, and not set up for sales, manning the booth recalled my days working at a commercial gallery, and by instinct I started flashing my waxy grin to stoic faces. And who were all those faces? Go to enough gallery openings in Chicago and you’ll recognize the same twenty people, but here were streams of strangers, all apparently interested in viewing contemporary art. Was this their annual art pilgrimage, like attending church on Christmas eve? 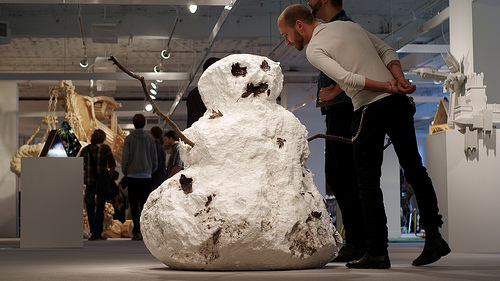 Despite the crowds and some over-reaching spectacles, and despite the saturated booths and the slow, steady push to keep one’s feet moving down the aisles, it was still easy enough to pick out the quality pieces, although as a viewer, subtlety and video art suffered my inattention. The standouts stood out mostly by context, and not always by content. A bizarro sound and sculpture installation, titled “The Quantum Field,” by John Brumit, Christy Matson and Sarah Wagner, greeted visitors as they exited the elevators onto the NEXT fair. A booming drone charged a spotlight on two calves—appropriate subject for the slaughterhouse city, but definitely more strange than Matson’s buzzing speaker installation from last year. These sound installations should be regular fixtures at the fair, and they fill castoff spaces in an exciting and unexpected way (the NEXT fair doesn’t fill the entire floor as Art Chicago does). Also on that floor was the focus on current or recent MFA students. In these galleries—unlike the exhibitor booths—only one or two artists shared the square-footage. The art definitely benefited from this, and even though it was ‘only’ student work, the room to breathe prompted a moment of clarity.

The urge to keep moving and consuming was summed up by the very brief Chicago Art Parade, which passed by the Mart’s main entrance at ten minutes till three-o’clock on Saturday, and disappeared about three minutes thereafter. More flash mob than parade, the fifty-ish participants, some in costume and others with props, dance-walked to the beat of a trashcan drum while very few people, mostly Mart security guards, observed the passing spectacle. At the front was a woman in a short dress who flashed her crotch, adorned with a fluffy merkin. There was a whale puppet and some tossing of candy. Unfortunately the parade’s route and timing was announced less than a day before, and it had to compete with various May Day events and protests downtown. Next year, hire Ben Fain, Chicago’s resident art parade producer, to get the show on the road.

Other time-based events included an advice booth presented by The Suburban in Oak Park, the Poemstore from Oakland, where poems were written while you waited, and which seemed to always have a line of customers, and tarot card readings at Club Nutz, from Milwaukee.

If you stayed to the end of any of the days at the fair, you heard an announcement: Thank you for shopping at Art Chicago. At least it was an honest announcement, and I hope there was indeed some shopping going on, because the fair is an effort worth experiencing, at least, and at most, once yearly.