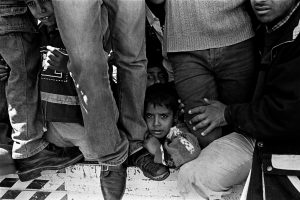 Is there a contemporary Chinese photographer whose work is not worth a close look? Gao Lei continues with the unbroken string of cutting-edge images from China that have hit Chicago in the last five years while he breaks with the dominant postmodern trend, by going global in his choice of subjects and shooting documentary series in black-and-white. Lei traveled to the Gaza strip with neither a sentimental humanistic, a political, nor a photo-journalistic intent, but to explore the “harshness” of a place that curator Wu Hung explains represented for Lei “the purgatory of contemporary mankind.” Lei’s pellucid, finely tonally graded prints reveal that harshness when we see a row of masked fighters with their assault rifles; two men shot from behind leaning anxiously over a wall as a little girl faces the camera with grim bitterness in the foreground; and a mother sitting straight in a chair, her expression fixed in stony stoicism, as her wounded and bandaged son sits on the floor in front of her in sullen pain. Gao Lei is a documentary poet, transmitting a truth lying beneath the surface. (Michael Weinstein)