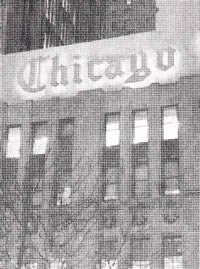 Perhaps it’s because of Betty White’s much publicized appearance on “Saturday Night Live” or television shows like “Sunset Daze” (self-proclaimed “Golden Girls”-meets-“Jersey Shore”), there seems to be a growing appeal to all things aged. No complaints here.

Knitting, a pastime easily falling into that category, is no exception, though its resurgent popularity these last few years is more likely an aspect of the boom in DIY than in its geriatric pedigree. Knitting patterns are at the core of Ewan Gibbs’ drawings, revealing modestly scaled scenes of Chicago life and landmarks, currently on display at Richard Gray Gallery. Chicago follows San Francisco as a subject for Gibbs’ translation of snapshot photography into meticulously executed composites of hatch marks and circles, the common language of knitters. Miniscule grids are filled with a single type of mark, repeated in each cell at varying gradations and thicknesses. The dual notations—the hatch mark and circle—recall the icons of male and female genders, as though the artist has gendered his language’s nouns. Taken from a distance, the grayscale drawings are delicate and moody, capturing the city as experienced through its weather. Each work’s fragility also present the subject—quintessential Chicago images from The Bean to Tribune Tower—through a lens of nostalgia. City scenes read as faint memories, abstracting concepts of time and aging in the process of looking.

While Gibbs’ drawings are mostly discussed for their association with knitting patterns, they are more accurately distinguished by the meditative quietude they share with the craft—in process and in product. (Justin Natale)