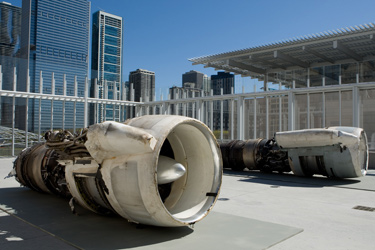 On the roof of the Art Institute’s Modern Wing, two jet engines lie naked under the sky.

In the works for which Hiorns is better known, he’s been able to exercise complete authority over an environment or object, e.g., “Seizure” from 2008, wherein a London residence was filled with a chemical solution that precipitated blue crystal on every available surface. Here and now, rather than receiving an additional covering, the two jet engines have been mostly flayed of aluminum skin, their systems of control revealed.

Given the museum’s large collection of designed objects, the jet engines could bespeak the golden age of modern industrial design—but they don’t. Rather, on the terrace, the disintegrating engines confront the surrounding downtown architecture in an uncomfortable way: they are remainders of the horror when jet engines collide with buildings, and the ubiquitous corruption that results.

May 25, 1979: One jet engine separated from American Airlines Flight 191 on take-off from O’Hare International Airport.  271 people were killed as that McDonnell Douglas DC-10 exploded into the ground. In 1997 Boeing acquired McDonnell Douglas.

May 10, 2001: Boeing announced plans to relocate to Chicago, having been offered multimillion-dollar incentives by Illinois politicians including former governor and now federal inmate George Ryan.

Here, the artist’s creative act is further explained by a wall-mounted plaque, which states that Hiorns has enclosed pharmaceuticals inside the engines, but the pharmaceuticals cannot be seen. One must trust the story told to us, that the trauma will be mollified, by the party standing most to gain from deceit. (Paul Germanos)

Through September 19 at The Art Institute of Chicago, 111 S. Michigan.

How is this self-indulgent?

The metaphorical “umbrella” of security provided by American air power (1945-2000) is said to have allowed domestic activity of all sorts (constructive and destructive) to flourish. Considering air power: While not meant to deliver of an explosive payload, Hiorns claims to have chosen engines from a plane which contributed to the U.S. military effort via intelligence gathering missions. The purpose of the things (engines) on the roof was to bear aloft the men and machines which stood watch over and against the enemies of The People. However, in 2001, similar artifacts of Boeing technology were “co-opted” and “re-purposed” in order… Read more »

The A.I.C. put a video on You-Tube for this exhibit — and the link, plus some discussion, can be found here: