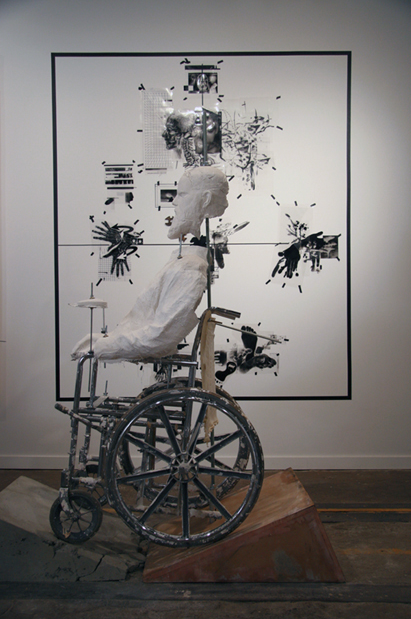 John Neff glances back over his shoulder to the empty café, to make sure no one is spying on us as he divulges the details of a work in progress. With Neff, whose large-scale sculptural installations are often spectacularly theatrical, it’s difficult to tell if his paranoia is also a bit of theatrics. In any case, I swore to keep Neff’s plans secret, and they are no small plans. He often thinks big. For instance, his current gallery installation at the Museum of Contemporary Art, part of the “Production Site” group exhibition, is envisioned as a 1:5.75 scale model for a pornographic enlarging machine, of sorts. If ever fully realized and magnified, according to Neff’s scaled dimensions, the life-sized body casts here would become god-sized, and the printed pornographic images would be human-sized, and almost real. At least, that is the fantasy.

In press releases, art reviews and artist statements, we often read that a particular work of art is responsible for seismic shifts of consciousness. For example, an artwork can create a tension (political, sexual, formal, whatever), or it re-orders and recontextualizes our perception, or it unearths deep-seated fears and desires within the viewer. That contemporary art rarely attains these lofty goals isn’t the failing of inflated art speak, but the confusion of virtual reality for real reality. Whatever the fiction—porn, religion, or art—you must have a lapse of cold sober reality if the power of fantasy is to take hold. 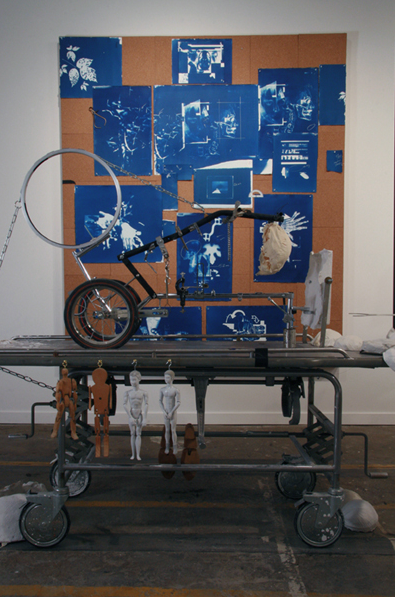 Neff is clearly a believer in the fantasy of image making. On the gallery wall, he posts this text: “The Pantograph will be a machine that enables users to replicate and re-photograph poses observed in gay male pornographic digital images using live models.” It will? That’s a rather assertive promise, but it does not work if your imagination is not properly attuned. Says Neff of creativity and sexual desire, they stem from the same origin.

In urban monuments we often see a heroic trailblazer sitting triumphantly atop his horse, but sitting quietly and still is the posture of contemporary society, says Neff, referring to computer users, and he’s made a monument to those armchair travelers in this installation. A short vacation inside the artist’s whirlwind of allusions (Cotan’s veined cabbages, Walt Whitman, classical Greek statuary, Renaissance-era humanism versus religiosity, gay porn) is rewarding, and you leave feeling like you learned something. One can dream and hope and imagine that Neff will one day create his machine on a grand scale, the way he truly envisions it. If art could only have so much power. (Jason Foumberg)

John Neff shows in “Production Site: The Artist’s Studio Inside-Out” at the Museum of Contemporary Art, 220 East Chicago, through May 30.