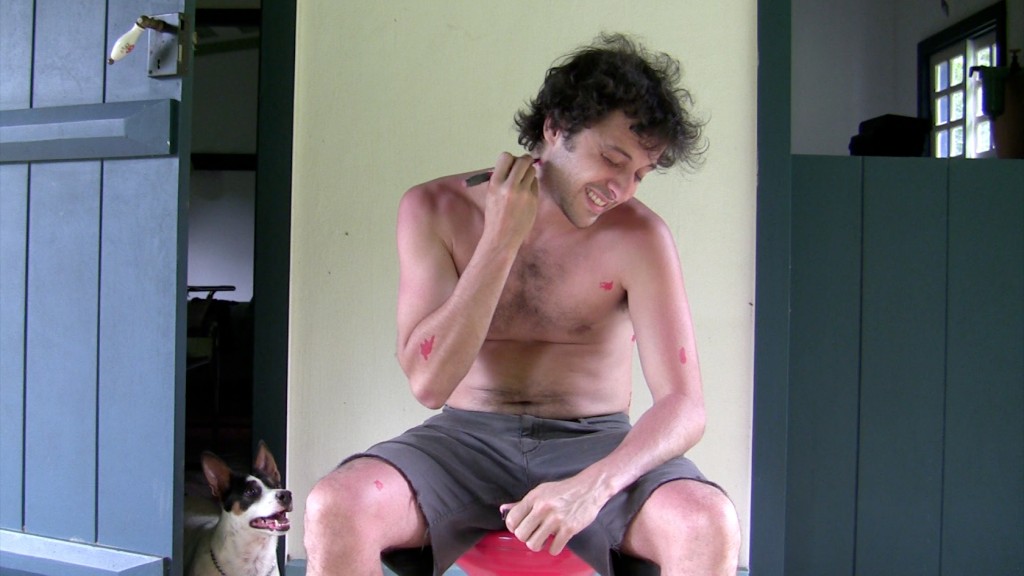 “If I’m satisfied, there’s something wrong,” says Diego Leclery, reflecting on an art practice focused on his own self-identity and how to express, subvert, denigrate or indulge it.

For his solo exhibition titled “The Natural,” now on view at Julius Caesar, Leclery hand-delivered postcards to advertise the show, allowing him to fully relish each recipient’s reaction as they caught their first glimpse of a fully frontally nude Leclery amidst a lush Brazilian rainforest. The most salacious piece in the exhibition, however, is “You Watching Me Watching Congo,” an unedited documentation of Leclery watching the film “Congo” as he reclines feyly akimbo on an overstuffed couch. It is a gender-ambiguous restaging of the reclining nude genre.

Born in France to a French father and a Brazilian mother, Leclery moved to Brazil at two and New York City at ten, mostly living stateside ever since. He confesses an affinity for abstraction, thanks in part to his parents’ art collection and a taste for art world heavies like Klein, Johns and Marden. Unceremoniously deeming his earlier work, consisting of paintings about negative space made in a post-9/11 New York, as a “gross misunderstanding of what art meant,” Leclery felt like an art-world outsider capable of aping the language of abstraction but crafting work bereft of its conceptual rigor.

He’s since expanded his practice to encompass performance, photography, sculpture and digital video, and his focus shifted to the self-portraiture that presently consumes him, amidst an embrace of self-declared “incompleteness” and an exploration of “wrong moves.”

Loosely organized around the idea of doing things for the first time, Leclery’s improvisations border on physical comedy (as in a tap-dance routine video) and spill across disciplines (as in the songs he’s written, recorded and streamed online at DiegoLeclery.com). Often making work just to exhibit it, his studio space is a mental one, where ideas are metabolized at a high rate, ideas flitting along at the clip of his stream of consciousness.

This summer, like the last, Leclery is making works and doing performances at a recklessly prolific rate, including a two-person exhibition with Tim Graham entitled “Me” at Monument2, and the upcoming residency-cum-play, “A man has two women…” at SAIC’s Sullivan Galleries.

In “The Natural,” Leclery is in his element, positing cleverness via ridiculousness, and he rightly assesses works in the show when observing that their “weakest element is also their saving grace.” (Thea Liberty Nichols)