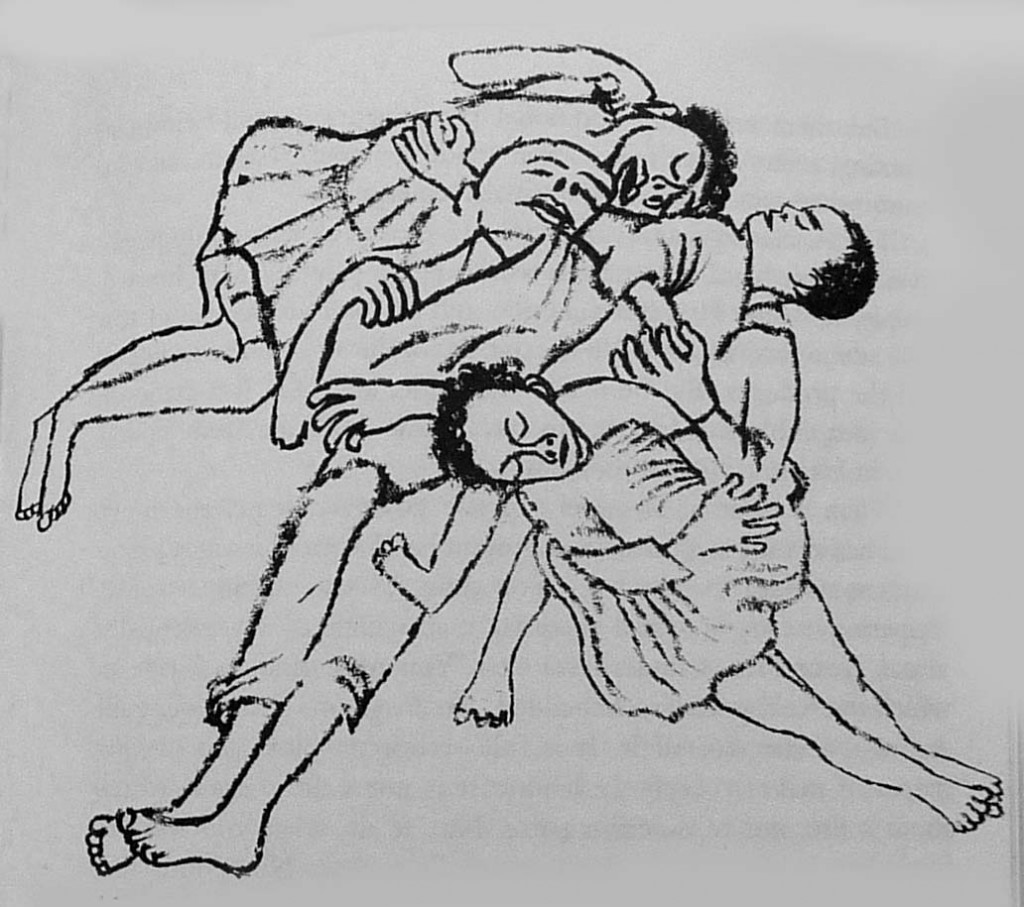 Whatever happened to the legacy of Ben Shahn (1898-1969)? In 1954, he represented the United States, along with Willem de Kooning, at the Venice Biennale. In 1956, he delivered the Charles Eliot Norton lectures at Harvard (as Igor Stravinsky, Herbert Read  and Robert Frost had done before him). His work entered the collections of major American museums like the Met, MOMA and the AIC. Today it seems like only illustrators still revere his accomplishments; one of them, Sandy Kossin, recently declaring that “his use of line and design made him the icon he became.” His main problem has been with art critics. In 1947, Clement Greenberg wrote, “This art is essentially beside the point as far as ambitious present day painting is concerned, and is much more derivative than it seems at first glance. There is a poverty of culture and resources, a pinchedness, a resignation to the minor, a certain desire for quick acceptance.” Ouch. Even his former friend, the critic Henry McBride, felt that his 1948 painting “Allegory” symbolized the redness of the USSR and recommended deportation. (Perhaps this was why Shahn advised art students to “read everything you can find about art except the reviews.”)

“Allegory” is currently off-view in the Modern Art Museum of Fort Worth, but the drawings of a chimera and dead children on which it was based are currently on view at the Smart Museum because they were also used to illustrate a dramatic episode in Chicago history, the James Hickman story, which drew national attention to the racial injustice that still draws the map of Chicago. This is only appropriate, as Shahn, the Jewish raconteur, was much more concerned with community life than with the specialized world of contemporary art.

But that doesn’t mean that these illustrations (for a story in the August, 1948 edition of Harper’s) are without aesthetic value. Ever since he became enthralled with the school of Giotto, seen at the Met, Shahn became both a perfectionist and an idealist. He may be criticized for applying the decorative and cheerful mode that so mitigates the harshness of this story of arson and murder, and he has completely omitted the brutal but crucial episode where James Hickman fired six bullets into his landlord whom he believed had set the fire that killed four of the Hickman children. However, mythopoets have always been selective, and there is a melodic sadness here that compels attention. Plus, one might observe that these original drawings have a visual quality that is far above the reproductions that appear on the pages of Harper’s magazine (some of which are also on display in the gallery). It turns out that in addition to being a strong designer of agitprop posters, Shahn was also a world-class miniaturist, on a level with the masters of sixteenth-century Herat. These are small, careful ink drawings that symbolize human compassion, almost the exact opposite of the monumental self-examination of his Abstract Expressionist contemporaries. This may explain why he is now off center-stage in the art world, but will always be of interest to social progressives and those who study American history in the twentieth-century. (Chris Miller)

A colleague has loaned me “The Shape of Content” by Shahn, which I am devouring, re-reading sections and taking notes. I found your article by “rabbit-trailing”, wanting to see what his work looked like. MOMA? AIC? Met? Norton lectures? the Biennale? I feel as if I have dug up a treasure. What happened here?