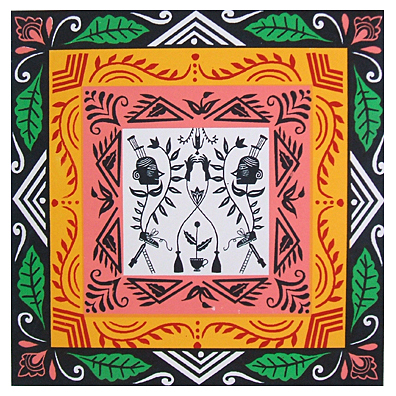 Lilli Carré’s exhibition of new prints at Spudnik Press contains mysterious symbols, fractured forms and cautionary tales. This small, informal show of works that Carré completed as an artist-in-residence at Spudnik includes several intricate screen prints and two handmade books. Carré is best known for her graphic novels and illustrations, but this series of prints is her first foray into traditional printmaking.

In her prints, Carré layers flat translucent colors to create the ghostly figures that float through her narratives. In the simple accordion-fold book, “Dreams,” a man imagines a naked woman appearing next to him on the train. Her red hips lean against his blue coat making a rich purple color where the two overlap. In the handmade book, “Don’t Drink from the Sea,” Carré depicts a hot summer evening in the city where people sweat so much it forms a pond and pale green figures swim through deep blue water. In both works, Carré uses the ability to adjust the transparency of the ink to tell a story about the fragility of the human form.

This is one of the main themes of Carré’s prints: the mysteriousness of the human body—a body that won’t stay still and won’t stay whole as it wanders through the city and careens through the pages of the book. These images are accompanied by short phrases that sound like cautionary tales. For example, the caption “my brother told me if I ate enough of these flowers I’d be able to read minds” appears beneath a young girl with sharply drawn red lines streaming from her eyes.

Carré’s intimate series of works illustrates what can happen when graphic novelists like Carré and Jeremy Onsmith (also an artist-in-residence at Spudnik) venture into printmaking with imagery that retains the clean lines and vivid colors of a comic strip. (Regan Golden-McNerney)