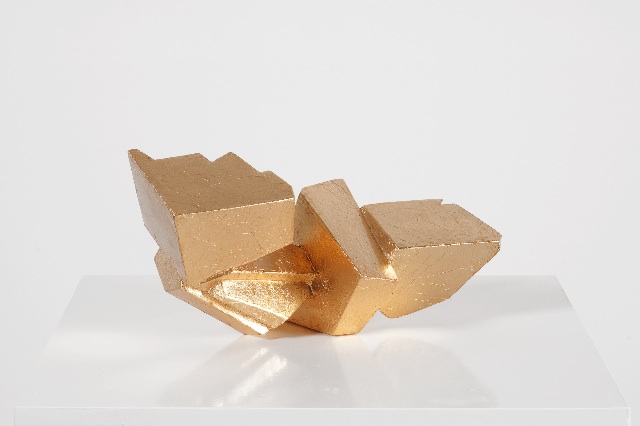 From the detritus of everyday symbols and physical objects to new approaches encountering transcendence through the experience of visual perception, the artists in “New Icon” tackle the notion of the iconic across a spectrum of interests and methods. Zachary Buchner, for example, gives us fake gold or, more specifically, imitation-gold-leaf laid over forms reminiscent of molded ingots, angular crystals and jagged cartoon crowns. These seemingly simple pieces fascinate the senses while spurring second-guesses of our assumptions about the “natural” value of this real yet simultaneously mythical substance. Carrie Gundersdorf’s collages echo this interrogation of the ubiquitous yet largely invisible, collecting clipped images of astrological phenomenon such as comets or the Northern Lights—the ethereal glow of which, while never personally seen by most of us, is nonetheless utterly familiar, having been “seen” at precisely the second-hand remove Gundersdorf highlights, via a proliferation of photographs that convey the experience with more clarity and focus that is possible in “real” life.

Dan Gunn’s installation “Inside the Studio for the Development of the Technology of Enchantment”— a collection of materials, paint samples, scraps of linen, etc.—rather than stripping away a sense of wonder, practically crackles with potential energy. Indeed, Gunn’s contributions to this show, in the final room, emphasize the awe inherent in even the simplest trappings of physical reality. His mesmerizing “Object of Interaction,” for instance, a rectangle of stretch lycra colored in acrylic and acrylic ink, generates, like all “monochromatic” paintings, a sense of depth as well as surface, with modulating tones of blue laced with barely perceptible veins. Yet, with its reflective sheen, this becomes an event not only of color, materials, and light, but also about our own presence, beyond mere perception, as participants, “interacting.” Like religious icons, then, here is art that gazes back at us as we ponder its mystery. (Spencer Dew)

Through August 1 at the Loyola University Museum of Art, 820 North Michigan.