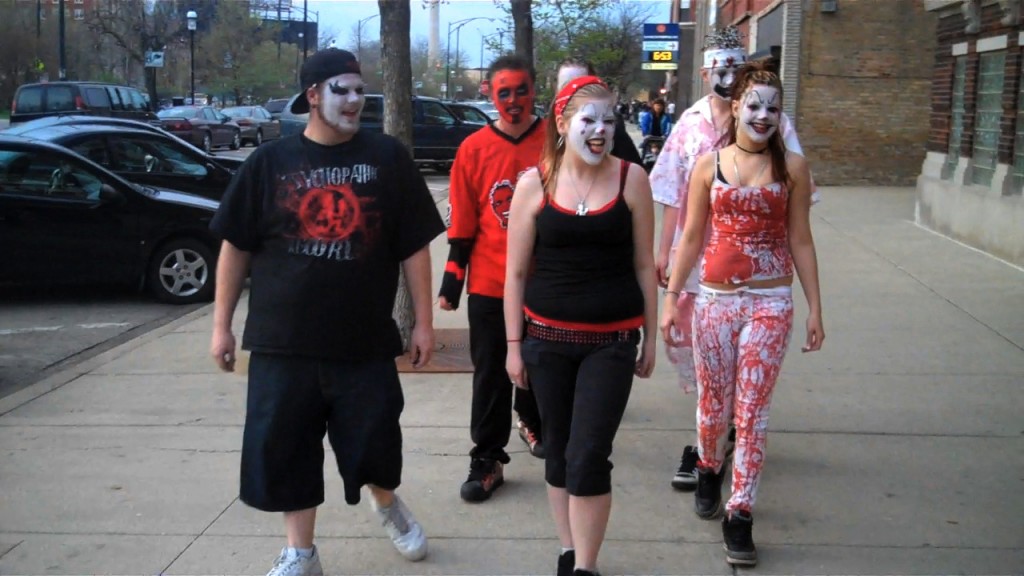 It’s safe to say that Juggalos, the clown-makeup-wearing, Faygo-chugging misfit fans of Detroit-based rap metal groups Insane Clown Posse and Twiztid, are unlikely subjects for most artists, but not Andy Resek and Johanna Wawro.

“My Funhouse,” an audio-visual exploration of Juggalo subculture, is situated in a modest storefront gallery. Wawro’s snapshots of teenagers decked out like their heroes adorn bright purple walls. Empty cans of Faygo frame the windows. A big-screen television loops disorienting footage from a recent Twiztid gig, which Resek captured entirely on a Flip camera.

“The world is so full of interesting people,” says Wawro. “I want to know all of them. I want to be everywhere all the time.” The Juggalo theme came about when she spotted a slew of them waiting outside the Congress Theater moments before Insane Clown Posse played one night. She and Resek began making contacts via social-networking websites, and that’s how they acquired most of the props in the gallery.

Though the two worked on a documentary together during their years at Columbia College, Resek says this is their first proper collaboration after years of admiring each other’s work. A mutual fascination with how others live and a willingness to build meaningful relationships with people they find intriguing inspires their individual and collective efforts.

The two have their differences. Resek notes the insular nature of art and how collaborations can push those involved in exciting new directions and not simply in terms of ideas. He says that Wawro’s personality has forced him out of his comfort zone. The same can be said of Wawro, who explains that Resek’s cool, rational manner counters her bubbly energy. This dynamic was significant in the creation of “My Funhouse” and will surely influence future endeavors.

Once the show closes Resek and Wawro would love to work together again sooner rather than later. Wawro says she personally plans to document female Juggalos—Juggalettes—and that a project documenting Indiana-based ranchers is a possibility. (Emma Ramsay)

“My Funhouse” shows at Eastern Expansion Gallery, a storefront window gallery at 244 West 31st, through July 7.