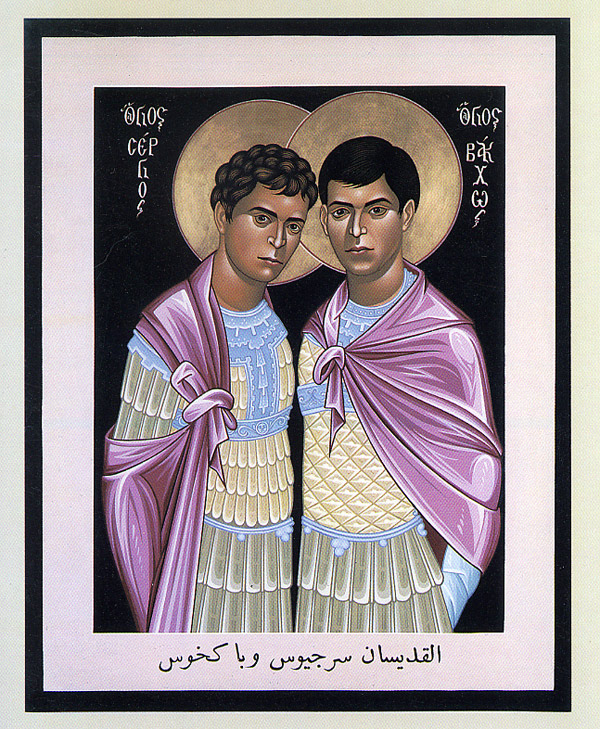 Gay Christians have long had a problem with their church—but not always—as proposed by this exhibition of contemporary Byzantine style icons by Br. Robert Lentz OFM and two of his former students, Lewis Williams SFO and Father William Hart McNichols. Many of the early saints have been venerated as couples for over a thousand years, and there is some evidence that one couple, the martyred Roman officers Sergius and Bacchus, had been joined by the early church in a kind of same-sex union. As with all ancient texts, widely diverse interpretations are possible, but if you want to believe that pre-Medieval Christianity tolerated or even sanctified same-sex union, this is the place to meditate upon more than a dozen highly crafted icons. The overall effect is breathtaking—maybe even stifling—since the pieces seem to have been perfected with obsessive intensity that shares the fervor, if not the otherworldliness, of the school of Photios Kontoglou on Mt. Athos where Brother Lentz once studied. There is such a strong, inward-pulling focus on the expressive eyes, there sometimes seems to be a greater emphasis on self than on the Ad majorem Dei gloriam. Father McNichols, a former Jesuit, and Lewis Williams, a secular Franciscan, maintain those high standards of intensity and traditional craftsmanship, while Chicago artist David Lee Csicsko has perhaps the most provocative piece in the show, a dramatic graphic of a vibrating St. Augustine whose severe dichotomy between chastity and concupiscence was adopted by Medieval Christianity. Contemporary Byzantine painting is alive and well in Chicago, with its many Eastern European congregations. That the icons in this exhibit are Christian is debatable—but that they are powerful and effective is not. (Chris Miller)