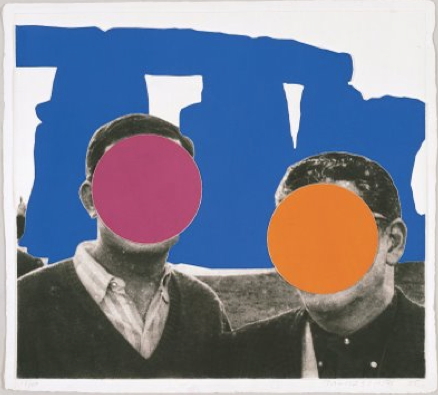 His signature stock photographic images of figures with their faces painted out by round, color-saturated circles are just the tip of the iceberg for this engaging retrospective. Film stills and collage elements are introduced, with framed pieces grouped together in an over-determined salon style aped by generations of subsequent Southern California artists, most notably the New Folk/Beautiful Losers circuit.

These poignant vignettes, sometimes expressed via chock-a-block arrangements, and sometimes contained within a single, large-format work, employ all the magic of successful surrealist art by beguilingly de-familiarizing the familiar.

Cowboys, palm trees and even portraiture itself is plucked from its original advertising and film context and cleverly cropped, re-colored, obscured, underscored and re-configured, evoking the uncanny and rendering recognizable imagery inscrutable.

The bright, pop-color palette and absurd tableaus are also elastic enough to encompass a whiff of gag, a hint of humor and a slapstick laugh-out-loud moment or two as well. With each choice Baldessari has made regarding size, arrangement, shape and color of elements in his artwork laid out right in front of us, works such as the “Guitar” and “Stonehenge” series make perfect sense according to their own internal logic.

Moving from past work to the present, Baldessari’s experimentation with multiple printmaking techniques and technologies, such as Mixografia Workshop’s exceptional ability to construct three-dimensional prints using molds, translates his sensitivity to shape into a more sculptural attention to form. The resultant Mr. Potato Head-chic “Noses & Ears, Etc.” series culminates in appendages that pop off of and are depressed into the print’s planar surface, and close out an excellent exhibition by igniting an urge to see more. (Thea Liberty Nichols)

Through September 26 at the Museum of Contemporary Photography, 600 South Michigan.