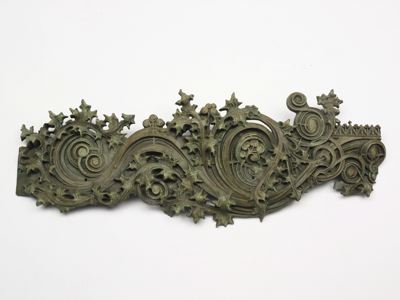 It’s hard not to romanticize the life of iconic Modern architect Louis Sullivan. Arriving in Chicago with nothing but extraordinary intellect, will power and desire, he quickly rose to the top of his profession, and almost as quickly sank to the bottom. It would be especially difficult for Chicagoans, who can regularly see and love his work, not to weep as he begs money off his famous protégé, Frank Lloyd Wright, or is reduced to designing decorative floor plates for a manufacturer of cast-iron stoves. He had a dream for a new, vibrant, democratic kind of American art and architecture, and that dream turned out to be a brief interlude between the dreary banalities of Neo-Classicism and the cool, elite severities of International Modernism.

His story is well told in the dramatic exhibition now on view at the Chicago Cultural Center. The show tracks his career through scale models, architectural fragments and amazing wall-sized photo enlargements that immerse viewers in great buildings that no longer exist. The extensive exhibition also tracks the personal side, with large-scale portraits that nearly span the sixty-eight years of the artist’s life, and references to the people most important to him. There’s material about his early mentor, the unconventional young architect (and anarchist) John H. Edelmann, his talented collaborator, ornamental sculptor Kristian Schneider, and his ex-wife, the novelist Margaret Davies Sullivan. There is even some poignant, if ugly stuff, like photos of the terra cotta ornament executed by an inferior contractor for a job in New York, and the sepulchral Sullivan knock-offs sold by a mail-order catalog, proving that Sullivan’s ideas required sensitive, masterful execution to be successful. 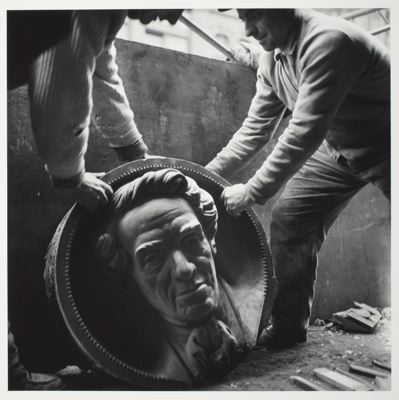 All of this is visually energized by the exhibition’s designer, Chicago cartoonist Chris Ware. The brief but penetrating commentaries accompanying the materials don’t hide emotional or aesthetic judgments, probably because curator Tim Samuelson, cultural historian for the City of Chicago, has followed Sullivan since he was a teenager, tagging along with photographer Richard Nickel who documented the demolition of Sullivan’s Garrick Theater.

Happily, Nickel’s photographs as well as those of Aaron Siskind and John Szarkowski are concurrently on display in galleries 1-2 at the Art Institute of Chicago. Their three styles could hardly be more different. Nickel passionately documented the destruction of world art no less tragic than when the Taliban dynamited the Buddhas of Bamiyan. Siskind used Sullivan’s buildings to produce abstract designs for his photographs, and Szarkowski set architectural detail within the context of the life that flows beside and upon them. The real stars of both shows are the ornamental fragments and the fascinating figure sketches that Sullivan must have drawn in some idle moment. Taken together, these two shows are a fitting tribute to an exceptional American artist. (Chris Miller)

Sullivan’s work had a profound impact on my sense of life. I was nineteen when I first encountered his Guaranty Building one cold night in Buffalo. At this corner actually:

It inspired a series of paintings from me.

There was never anything quite like his work before or after. He captured his moment in time and expressed the spirit of his age.

Beyond tragic the way he was marginaled and ignored later in life. A truly amazing man.