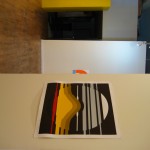 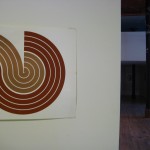 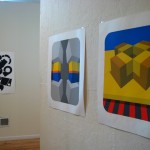 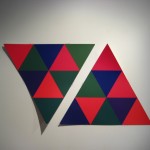 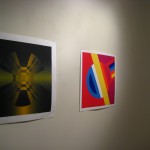 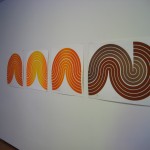 Jason Pickleman discovered dozens of psychedelic silkscreen prints from the sixties and seventies tucked away in flat files he purchased two years ago from a now-defunct art gallery. “Corporate Psychedelia” marks the first time his collection has been displayed in its entirety.

The prints are psychedelic in the strictest sense of the word, with unnatural color schemes and geometric yet strangely evocative forms. These works do not offer conventional portrayals of anything in particular. Like true psychedelic art, they attempt to transcend the mundane. They show what is not there as opposed to what is.

Though thoughtfully crafted, the pieces are compelling neither individually nor as a group. From either perspective, the shocking nature of psychedelia is lost; garish hues and abstract images become expected, like slight variations of the same image. However, the collection cannot be written off entirely—the intriguing, ambiguous nature of its provenance compensates for its banality.

The origins of these works are unknown. The artists’ identities are obscured. Few of the posters are titled and most, if not all, are part of a larger series. Pickleman does not seek to rectify any of this. He instead presents the collection as it was when he first uncovered it, offering viewers no additional information or insight. The pieces are not original works so much as they are products.

Pickleman exploits the generic nature of his collection to great effect. The latter does not detract from the pieces. On the contrary, this staleness is the crux of the exhibition: if countercultural elements are mass-produced and brought into mainstream society, into the living rooms of the country, do they lose their edge? (Emma Ramsay)

“Corporate Psychedelica” shows at the Co-Prosperity Sphere, 3219-21 South Morgan, through August 14. Hours are by appointment.