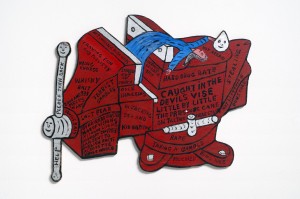 We can be absolutely certain that Reverend Howard Finster hailed from parts unknown, even if those parts resemble rural southern U.S.A. The mystery surrounding him expands with each piece of art, signed “Howard Finster from God” or “Howard Finster Man of Visions” or “Howard Finster World’s Minister Of Folk Art Church Inc,” among other outlandish and intriguing things. He might come from a charming tourist attraction he displays intimate knowledge of with “Jeff and Jane Camp on Planet U Run.” The chaotic and over-populated landscape resembles Finster’s own alien homestead in Summerville, Georgia, which bursts with handmade buildings and sculptures onto which are affixed paintings, wood carvings, wood burnings and artifacts ranging widely from the buttons of a pea coat to melted cathode-ray tubes. The spectacle of accumulation is as powerful as the sheer otherness of Finster’s vision, which exists solely to transmit the word of God as Finster hears and sees it, and is frequented by a cast of characters such as Presidents Washington and Eisenhower, Henry Ford, Coca-Cola, Satan and, of course, Elvis Presley.

It’s impossible here to talk about one particular work; there is simply too much to say about his “sermons in paint” and “preaching diagrams.” It’s also difficult not to wonder if Finster completely accepted everything that ever popped into his head as the word of God, an absolute truth allowed to flow through him as a gift from the heavens to mankind. Each bit of debris and plank of wood or broken mirror, each haphazard construction of words is imbued with divinity. Walking into this show feels like stealing a glimpse of some underground messiah’s inner sanctum, and you realize how difficult it must be to wear such a mantle. Finster’s work has its own tractor-enamel shine, it’s own lingua franca which expresses a depth of belief most of us sinners are plain unaware of, a belief filled with great joy and equal gravity. Whether or not the work touches us, we can also be absolutely certain that Reverend Howard Finster holds devout belief in the word of God as communicated through the work of Howard Finster, and that belief—however foreign it may feel—is worth seeing. (Damien James)

This review reads like a press release from the Phyllis Kind Gallery, and it does seem that, unlike Elvis, Howard Finster didn’t need a Colonel Parker to negotiate with promoters and distributors. Can’t we query whether that “mystery that surrounds him” has been manufactured for our entertainment? Do you really think Finster was unable to correct his own spelling and was limited to using tractor paint? And has anyone ever received that “word of God” that he was allegedly transmitting – or has he just been adopted as something of a colorful clown into the secular worlds of American popular… Read more »

I’m so pleased to see that someone reads art reviews that I would like to say ‘thank you’ before anything else. That you cared enough to comment is a pleasant surprise as well. And I’ll check out some Phyllis Kind press releases. That’s the best dig I have ever heard. At least, I want to think it’s a dig. Regarding Finster, his art works for me if I buy at least some part the fiction of Howard Finster, and I think we allow so many fictions of far greater significance to effect our lives in tragic ways that allowing this… Read more »

Damien, this is a great line: “Solipsism and awkwardness have always been qualities I figured everyone in the art world simply accepted and even encouraged” !

If solipcism and awkwardness are to be accepted and encouraged, what’s the point of art criticism? On what basis can a judgment be made? All that’s left is something like “authenticity”, and I’m doubting that the once-reverend Finster even had that. Did you notice that almost all of the personal portraits in his show were of his art dealers and collectors? As his dealer, Phyllis Kind, explained on her website: “The term “Self-Taught Art” simply refers to any object or set of objects in either two or three dimensions which was not initially intended to be art but was made… Read more »

The point of art criticism is probably something for each art critic to decide on their own, just as it is up to each artist to decide what the point of their art is. Otherwise, we all write and create the same thing, and I’m sure that a few minutes of google searching would reveal scores of Howard Finster reviews that sound alike; intellectual deconstructions of the art and artist, or unanimous and impersonal praise. Though I call myself a writer and not an art critic, for me the purpose of writing about art is to start a conversation, which… Read more »

Hmmm, in hindsight, “which it seems I have accomplished here more than many art critics who contribute to New City” sounds terribly lacking in tact and graciousness. Hopefully those words weren’t read by any New City contributors as insulting. If so, my apologies. I do think, however, that we can stand to poke a little fun at ourselves.