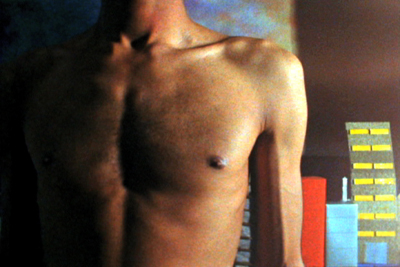 In Latham Zearfoss’ 2008 video “Self Control,” an animated silhouette formed by a pair of hands, “the spirit of… past and future utopias,” appears in the multicolored bars of a test screen, announcing its intention “to guide you to the new subjectivity, a place of great trust and sensuality.” This magical optimism of communitarian queerness, a theme throughout his work, has an intriguing dissonance with an assertion made in another video: “The personal is NOT political!” This is a call-and-response chant led by Anil Ramayya, a speaker on behalf of the collective Feel Tank at “Pilot TV,” a 2004 event focusing on radical video and “queer feminist trespass” held over a space of four days in 2004 and documented in Zearfoss’ 2006 documentary, co-directed with Dylan Mira: “A Call and an Offering.” Ramayya’s statement presumably had some ironic intention, but it’s hard to escape the suspicion that the “spirit’s” promises, particularly in a video focused on themes of trust and danger, also connote emotional distance.

Lee Edelman, in the book “No Future,” contends that queerness denies reproduction, and thus the future, and thus all politics: “in that neutral, democratic literality that marks the futurism of the left, one could only encounter a queer dismantling of futurism itself as fantasy and a derealization of the order that futurism reproduces.” By disposing of ideology, the past, always a quasi-mythical pastiche, can be creatively re-imagined in the present without literalism or faith, as in Zearfoss’ 2008 piece “Myth of My Ancestors (a Re/Creation Fable),” a blissful Eden that takes the form of a colorful lo-fi a cappella Cocteau Twins video. His earlier videos sustained this mild sense of claustrophobia, referring to a world outside of the queer community largely through some of that community’s key motifs: club music, specialty cooking, celebrity gossip, lifestyle splendor, family alienation.

Lately, though, Zearfoss has moved into theatrical appropriations of public oratory. “I Give You Life” (2010) is a movingly spare audio and textual treatment of the bitter address made in court by the father of hate victim Matthew Shepard to one of Shepard ‘s murderers; Jane Fonda’s words (and breathing noises) are painstakingly sampled so as to utter the United Nations’ Universal Declaration of Human Rights (“World Piece Featuring Jane Fonda,” 1948/2005/2010); and, in the companion videos “Morality” and “Responsibility” (2010), two children poignantly deliver speeches on the eponymous themes, borrowed respectively from Sinead O’Connor and a Vatican PR spokesman. These videos are thoughtful and engagingly uncanny. But zeal, stridency or joy are not primary resonances in Zearfoss’ work, nor in that of other emerging voices of the “gay utopia.” Rather, grand gestures and dramatic buildup are deflated by self-deprecation and the pathos of the banal. Still, visual rapture, group energy, and epic sentiments repeatedly peek out, suggesting something better than our glum postmodern compromises of virtuality and tolerance. (Bert Stabler)